@mikecane but how many of those Kindle sales are to the app on an iOS device?Sun Aug 22 23:43:21 via Twitter for iPhone

In response to: Kindle Outselling iBooks 60 To 1

And then, does that matter if it’s Amazon’s world now? See this: Why the “I hope Epub kills Kindle format” fanatics are fighting the wrong battle 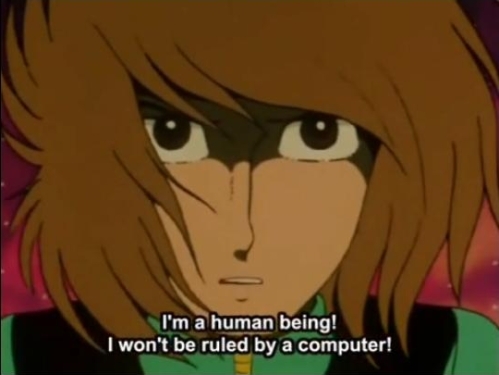 Another thing I watched at Hulu today was an episode of Space Pirate: Captain Harlock.

I saw some of this series in the mid-1970s on a local station here that rented time to Japanese programming.

I loved the series then. But the 1970s were a bad, bad time for TV, especially animation. So Harlock was a revelation and a savior.

Today, it didn’t hold up. The animation — while still stylish — was very limited and was what Chuck McCann once described as “illustrated radio.”

I’m wondering how much more TV I grew up with and loved will turn up feeling … old?

There are series I planned to buy as DVD sets. But Hulu is showing me that would be a waste of money — and re-watching them a sad waste of time.

Having no desire to hand-edit the HTML for a long presentation to correct a raft of Microsoft-induced incompatibilities, I wrote a Perl program, the demoroniser, to transform Microsoft’s “junk HTML” into at least a starting point for something I’d consider presentable on my site.

What Amazon’s Kindle Ad Looks Like To Me Now 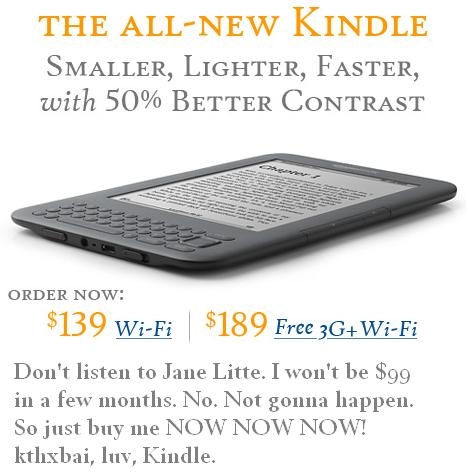 via Kindle Outselling iBooks 60 To 1

This confirms what I wrote a few weeks ago:

ePub supporters can also claim that the hundred-million-plus iOS devices out there gives ePub the device population advantage via iBooks. This too is nonsense. It’s only a potential population.

1) iBooks is still an optional download
2) ePub from Sony, public libraries, Kobo, and Barnes & Noble cannot be read by iBooks.
3) Even if iBooks was included with those devices, those devices do not guarantee readers

When someone buys a Kindle (or a Sony Reader, Kobo Reader, or Nook), they are explicitly stating they are a reader. So the population of those devices generally match the population of readers who use devices (I say “generally” because some people might discard them later on — after they break, for example, and not replace them).

When someone buys an iOS or Android device, there is zero guarantee that person will use it for reading or has any interest in reading whatsoever.

So having over a hundred million iOS devices says nothing about whether or not the device reading population will expand. It’s nothing but potential.

And that potential is a harder nut to crack than you might think.

The Incredible Hulk: The Psychic

I’ve waited well over twenty years to see this episode again, and today Hulu — and Opera — enabled me to do that.

In an otherwise forgettable series, this one episode stood out.

END_OF_DOCUMENT_TOKEN_TO_BE_REPLACED

After dutifully reporting even the smallest profits on their tax filings this year, a number — though no one knows exactly what that number is — of Philadelphia bloggers were dispatched letters informing them that they owe $300 for a privilege license, plus taxes on any profits they made.

Hoo boy.  I can see every self-publishing writer in Philadelphia wondering where they will move to now.

This is absolute insanity.

But we can all expect more of this as the collapse of the entire economic system continues and localities devise new schemes to bleed the populace to close budget gaps.

Dear Jane: How Do I Sideload eBooks onto the Kindle? | Dear Author

Dear Jane: How Do I Sideload eBooks onto the Kindle? | Dear Author

I hate to tell you this, when you use social media to spam people but never really interact with us?  Us meaning readers, writers…all of us, the people who make up the up the social part of social media?  You’re not getting it.  All you’re doing is beating us over the head with your books.

via Social Media… UR DOING IT WRONG – Shiloh Walker