The reclusive author of this postmodern, post-perspicuous literature is a prominent scientist, professor, inventor, and visionary whose pioneering work in molecular biotechnology served to usher targeted genetic medicine across the threshold of history-his intellectual accomplishments are, in a word, profound. The first editions of this series of books received both Editor’s Choice and Rising Star designations from the publishers.

Konrad Ventana (literally, “Bold Counsel through a Window”) embraces the time-honored ideals of social responsibility (where poets, playwrights, and artists once served as guiding lights) for a modern society that “walks and runs for the cure” yet, in actuality, has been lulled into a state of non-participation in the life-of-the-mind and acts of meaningful creativity.

Weirdest press release I have ever read.

Filed under Books To Check, Quoted

People are complicated.  Our motivations are multifarious.  Success is elusive.  You can try, but you’re gonna hit a lot of blind alleys.  Your one big break will probably be cumulative, a result of years of hard work that pay off in that one performance that puts you over, years after you thought you should make it, after multiple late night soliloquies wherein you decided to give up.

This is a nonsense press release. Did anyone out there really expect to pay to watch MP4 video from sites such as YouTube, Vimeo, or elsewhere? No. Those sites would have seen their traffic plummet.

This is the relevant part that is still the troublemaker:

All those xBooks that include MP4 video? You have to pay MPEG LA for including those videos because you are charging for the book.

And free TV video services? That’s Hulu, ABC, NBC, CBS, Fox, et al — all apps on your iOS, Android, and/or webOS device. So what you enjoy for free right now is going to come to an end at some point — because greed rules with patent holders and this press release is crafted to allay the justified fears of small creators who want to use MP4 video in their projects.

This press release really changes nothing.

Small creators will still have to pay for MPEG LA’s licensing in order to plop MP4 into an xBook for sale.

It shocks me how people have been snookered by this!

157 Mobile App Stats You Should Know About

Ultra frugality: could you live with only digital possessions?

According to Sutton, “I’ve found that more stuff equates to more stress. Each thing I own came with a small expectation of responsibility. Instead of trying to distribute my time too thinly among all of my possessions, I will simply get rid of most of them. I will eliminate a large part of stress in my life and I will truly cherish the few things that I own”.

It sounds good but not many people reading this will put much thought into it.

You still wind up with stuff: Clothes — for seasons too (warm/cold), shoes, towels, bedding, grooming items, and the like.

And if you have a pet, add in its items (litter box, litter, toys, leash, etc).

The article mentions downsizing to renting a room. That’s a fiction from someone who has apparently never done that. I have, and in a rooming house too. That’s not really a life.

A wee house would alleviate some of the horror of single-room existence, but not all of it. In fact, it brings a new problem with it: Security — as in keeping robbers out when you’re out.

I just swiped this photo off eBay for one with a Buy It Now price of $225.

This is what Chippy will be demonstrating and commenting on in this evening’s live video.

I wouldn’t go buying that without hearing Chippy’s assessment. And that Samsung Galaxy Tablet looks good.

The Only Reviews That Matter: Readers!

@lizcastro epub is a kind of nightmare and your book is like awakening from itThu Aug 26 11:22:04 via Twitter for iPhone

Update, here’s a picture of the box: 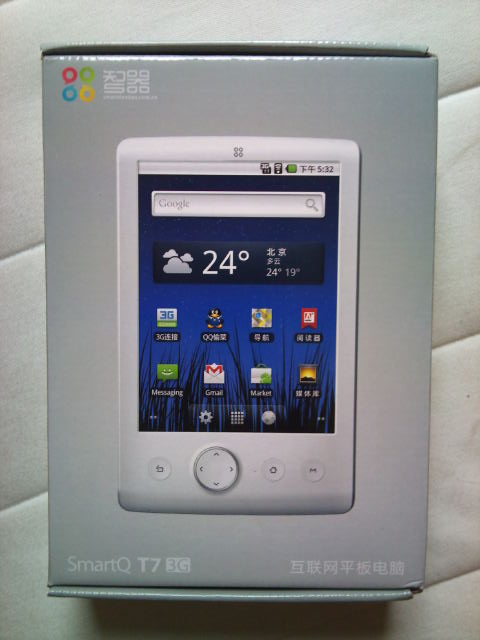 It will take place on Usteam and it can accessed via the LIVE link at CarryPad.

I attend most these live events and they’re great!