I’ll say it again: It was Ken Bruen and the cover design of The Do Not Press that got me reading crime fiction. Browsing the shelves of the NYPL, there was the distinctive cover branding, blue … 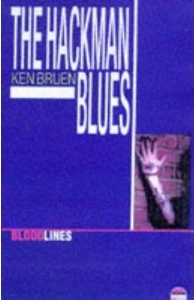 … with that shout-off-the-shelf red dot:

All their books looked like that, so I could find them scattered across shelves easily, to pull and borrow and read.

END_OF_DOCUMENT_TOKEN_TO_BE_REPLACED

When Steve Jobs returned to Apple, the first thing he did was slash the product line. That made buyer choice far less confusing and focused Apple’s energies. It also preserved Apple’s dwindling capital so the company could remain alive.

Archos, on the other hand, thinks it can achieve success by spewing out a confusing array of devices, some of which it’s calling “tablets” when they’re no such things. What they are, in fact, is fodder for the iPod Touch steamroller. Really, these smaller devices will wind up on Woot! faster than you can say, well, Woot!

Archos is spending money — no, wasting money — like a drunk in a whorehouse.

Engadget has all the details.

END_OF_DOCUMENT_TOKEN_TO_BE_REPLACED

Angry Robot Books was once an imprint of HarperCollins but is now an independent press.

What about DRM?
Books bought from this website are sold DRM-free. Books bought from other online retailers may vary – we do not ask for DRM to be imposed on any of our titles, though some stores add it by default.

The Kindle Editions, however, have DRM on them. This is because they wound up at Amazon via a distributor, instead of direct from the publisher.

Still, the prices are attractive and I’ve downloaded samples of seven of the nine (two of them will be released this Thursday) from the Kindle Store.

May have to unfriend you. I can’t be a part of your shameful downward spiral down the K-hole. @mikecaneTue Aug 31 15:47:03 via web

Apparently this is enormously appealing to companies, which makes sense, given that law firms and especially consulting firms are often used as a kind of responsibility deferral system, allowing managers to fall back on some variation on, Yes, technically I approved this consequential decision that didn’t actually work out for the company, but as you can see we hired the most prestigious consulting firm in America — a whole room full of Harvard graduates! — who affirmed that this was the best option.

Oh yes indeedy.  If you want to know why there are so many damned parasitic conslutants — um, consultants — out there, that’s exactly why.

When the inevitably rotten (and it is 99% guaranteed to be so!) advice proffered blows up in a client’s face and leaves that company open to massive lawsuits, like a child they get to whine,  “Well, he said …”

And you thought things were run by adults?

Not too many people have seen this device.

A review of it popped up today, but first let’s look at some pictures:

END_OF_DOCUMENT_TOKEN_TO_BE_REPLACED

Another Way to Look at the iPad vs. Kindle Debate – NYTimes.com

Because both Amazon and Barnes & Noble offer excellent e-book reading apps for the iPad (for their own proprietary e-books), the size of Apple’s e-book library is essentially irrelevant.

via Another Way to Look at the iPad vs. Kindle Debate – NYTimes.com

And there is also the Kobo app.

First comes news that Borders will slash the price of the Kobo Reader to $129 and the Aluratek Libre to $99.00.

That puts the USB-cable syncing Kobo at $10 less than the WiFi-only Kindle 3. I don’t think that’s enough of a price difference to help sales at all.

Second comes word that Staples will be stocking all three models of the Kindle in its stores this Fall: WiFi-only, WiFi/3G, and the DX.

Now here’s the interesting part: Borders claims it has “about 650” stores. Meanwhile, Staples claims “1,871 retail stores throughout the United States and Canada.”

Which eBook device is the public most likely to encounter? The Kobo Reader or the Kindle?

In fact, ask people about eBooks and “Kindle” comes to mind before anything else.

Kindle has mindshare — now it will have shelfshare too!

Just as news, books and all other forms of printed material are undergoing their own revolutionary transformation from dead-tree media to the infinitely more malleable formats made possible by computers and the Internet, so too have scientific journals begun their slow, painful transition away from old, hidebound thinking.

Liquid Journals follow the disintermediated tendencies of the web to their logical conclusion: Liquid Journals do not rely on peer review. Instead, they are assembled by individuals or groups of scientists and experts using the Liquid Journals platform.

The Liquid Journals platform does not discriminate between peer reviewed and non peer reviewed papers, raw data sets and blog posts. The idea is that smart scientists can decide for themselves what belongs in their own liquid journal, and influential leaders and groups in the movement will organically accrue a readership to their journal according to the quality of the work they select.