Let me cut to the chase immediately: Stay the hell away from it!!

I went into Borders with the hope of fondling one of the new models of Sony Reader.

Instead, they had the Velocity Micro Cruz Reader on display, and it was as functional as it ever will be.

The first thing I did was call up the Applications Tab. I’ve seen many videos where people drag this damned tab to make it work. I always wondered if it couldn’t just be tapped and it’d spring up on its own. So that’s what I did, a tap. And yep, it comes to life that way.

But that was the first indication we’re not in iOS Land, Toto.

You know how things spring and pop on an iOS device? And even on speedy Android devices? Forget that here. The Applications Tab was climbing that screen. I swear, you could see it weakly struggle step by step!

I tried the browser. It didn’t work. I guess Borders didn’t have its WiFi set up properly. Eh, that happens, so they get the usual pass.

I looked in Settings. I set the Brightness to max, the audio to max, and selected to have audio feedback for screen presses.

The photo app had no photos. There were some other things on it — the YouTube app didn’t work (no WiFi) — but I went straight for the Borders app to check out how it did eBooks.

This is where the trouble really began!

There were two public domain editions of Sherlock Holmes stories already in the library. These were from Kobo.

OK, I tapped on the cover of one. And suddenly I begin to sweat.

Because all I get is this damned circle chasing itself over and over and over and over and over and this goes on for like five frikkin minutes and at one point I’m pulling out a paper clip I had on me to do Reset and guess the fek what? the damned Reset hole is too small for the paperclip to fit and all I need right now is for one of the stupid Borders people to come by and think that I broke it and try to charge me for it and all I want to do is get the hell away from that piece of crap right now!!! 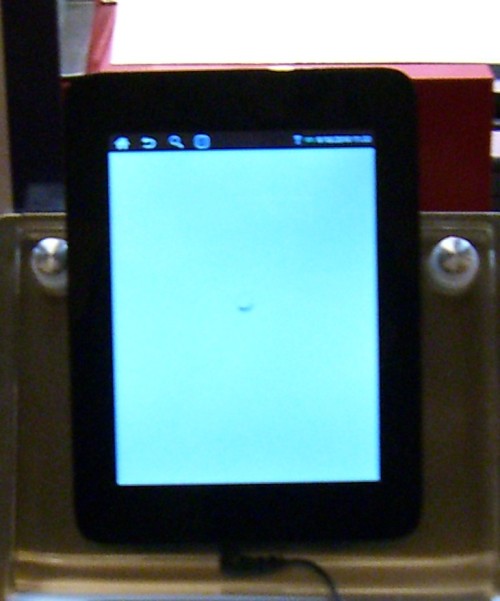 So I sidled over to play with the Kobo Reader for a while. Which was very soothing because I like all the neat little design touches they’ve put in it.

Lo, when I looked at the Cruz Reader, it actually showed a page of text! What the hell was all that damned circle spinning about?! I still have absolutely no idea.

So, there was text and I did something stupid. I immediately went to change the font size.

Guess what I got again?

I fled to the Kobo Reader again. I noticed its screen is brighter than the Nook. I marveled again at how light it is. I am falling in lust with it. It’s just so pretty!

I peeked at the Cruz Reader and it showed text again. Whew! 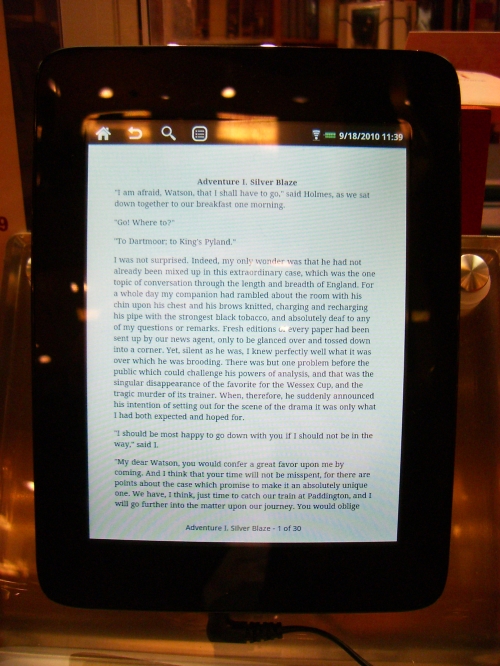 And now the trouble began to deepen!

Finally, it turned the page. It was magic! 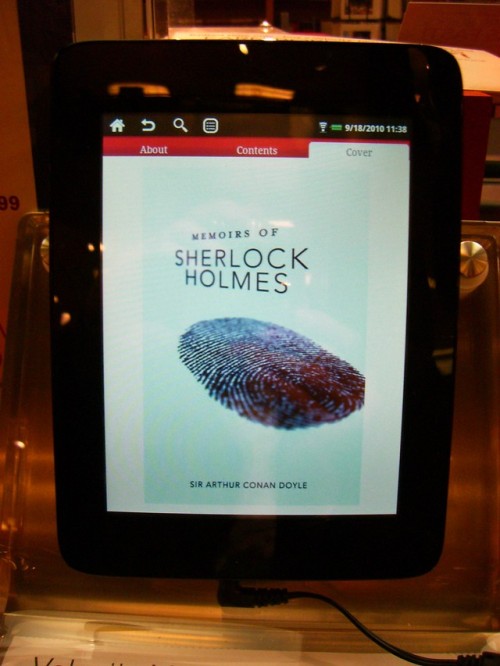 Then I was stupid again. I tried for About. Rinse and repeat the above.

I tried the Home icon. Rinse and frikkin repeat!

Oh my god this thing was sooooo unresponsive! It’s as if the upper portion of the screen — which is necessary for navigation — is calibrated for MOAR screen above it — which ain’t there.

I don’t know what happened now or how I got there, but I finally made it back to the Home screen. I immediately went to Settings. And nope, there is absolutely nothing I could find to adjust screen calibration. I got nuthin’!

Having gotten back to the Home Screen, so it could entice the next deluded sucker into a Death Fondle, I had had enough and I left!

Turn around and run run run away!!!

This is a miserable device that simply does not work!

You will have more satisfaction taking $199+tax in cash, putting it between two slices of bread, and eating it.

The Cruz Reader is something that should have never made it onto shelves to fool weak and gullible people who otherwise can’t afford an iPad.

It is a botch, it is pus oozing from a tech wound.

Stay the hell away from it!