TL;DR version: The Samsung Galaxy Tab, the Archos 70, and Archos 101 are probably the only ones worth buying. Outside of the iPad, that is.

I finally got to fondle a working Cruz Tablet. Here it is showing the mobile version of Techmeme:

It was not a pleasant experience at all. I thought the screen was poor and touch experience was poor. This is in addition to it being bulky and having brick-like weight.

Best Buy also had in the Huawei Ideos 7 tablet:

It has its Android buttons on the left. And although they look as if they’re capacitive, they are actually buttons with click feedback.

I was surprised at how small the Huawei seemed compared to both the Cruz Tablet and the Archos 7 Home Tablet.

But as the dimensions above point out, that was an illusion. I think the stretched landscape design does that. 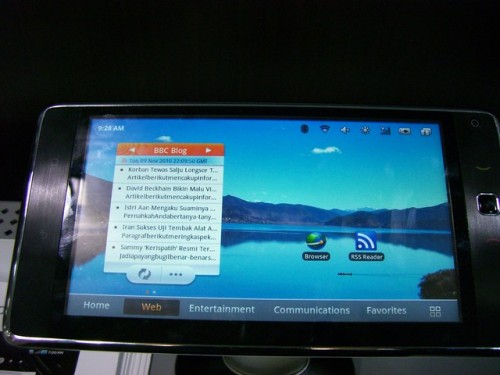 I was not at all impressed with it. The touchscreen was difficult to use. I didn’t find out until today that’s it’s resistive, not capacitive. It’s soft touch resistive, but still, not worth having.

Best Buy is selling this in one section, the Dell Streak in another area, and the Cruz Tablet in yet another area. And they’ve printed a guide to tablets that includes only the Huawei and the two versions of Samsung Galaxy Tab (Sprint white, Verizon black). 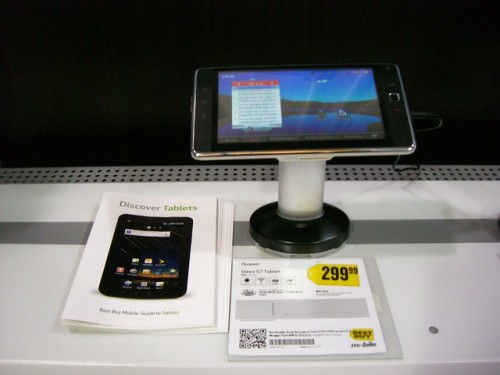 That’s going to confuse the hell out of people.

Apparently, the only tablets that qualify for being in the new Tablet Area are the Huawei and the two Galaxy Tab models: 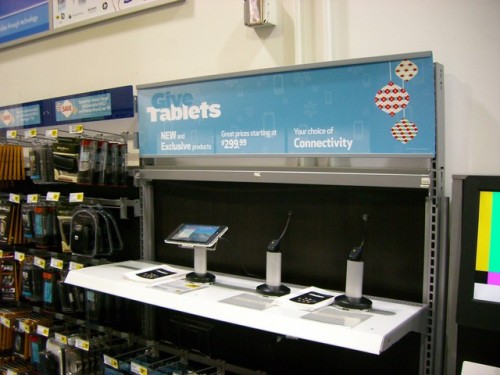 There are going to be a ton of crap generic Android tablets for sale, such as this one from Sylvania.

Just stay the hell away from them. They’re all sucker bait.

Stick to looking at the Samsung Galaxy Tab and the two Archos, if you have any desire for a non-iPad tablet at all.

I’m beginning to think these will all ultimately be FAIL. Apple has established a market for the iPad, not one for tablets. @fakebaldur pointed out:

Played with a Samsung tablet in Schiphol and I think anybody who's interested in a 7" tablet wd be better served by one of those 4" phones.

A 7" screen is a lot smaller in practice than people realise. The diff in practice betw 9" and 7" is greater than the diff between 7" and 4"

I don’t totally agree, having had a 4″ screen (the Toshiba GENIO Pocket PC), but I can’t see what these tablets would do for someone that their 4″ Android phone couldn’t.

In my own case, I still want an Archos 70 mainly for video playback, plus eBooks via Aldiko and other apps. I have a specific need and use case. But the general public? Most people will buy these and stop using them within a month or two, I think.

None of them are the iPad. And people will find that out quickly.