NOTE (May 14, 2011): This is just about the most popular post here. People are very interested in this topic. Go look at this post too and the backlinks at the bottom of it for more on the subject.

Google Books is a special interest of mine. Primarily because there’s a lot of them I want to read. And I’m not exaggerating: I have about 2,000 PDFs of them downloaded (so far).

So tablet hardware has to be able to handle these PDFs to be of any real use to me.

Today I got to test Google Books PDFs on a NookColor, Samsung Galaxy Tab, and an Apple iPad running iOS 4.2.1.

Which one could handle the job?

I’m going to skip details of what each device is like. Everyone knows what the iPad is like and most people understand an Android tablet — at least in the case of the Samsung Galaxy Tab — is just a larger version of an Android phone. I’ll save details about the NookColor for a separate post.

There’s one book I use as a test every time. It’s called Success: A Novel. [UPDATE: Some people outside the U.S. have stated they can’t download this PDF. It’s public domain so I don’t know why Google Books is disallowing it. Here is a link to it on Google Docs.] It’s not onerous to download using WiFi and the size of the PDF shouldn’t be a problem for any device asking for people’s money to be able to handle.

Aside from iPad screensnaps, all photos have been resized and rescaled to VGA. Each image can be clicked to enlarge.

That’s the book in Google Books. [Update: It was, prior to December 6, 2010 and the launch of Google eBookstore. The UI of Google Books has now changed.]

I downloaded the PDF to the NookColor. Tapping on the listing in My Downloads automagically opens it to read: 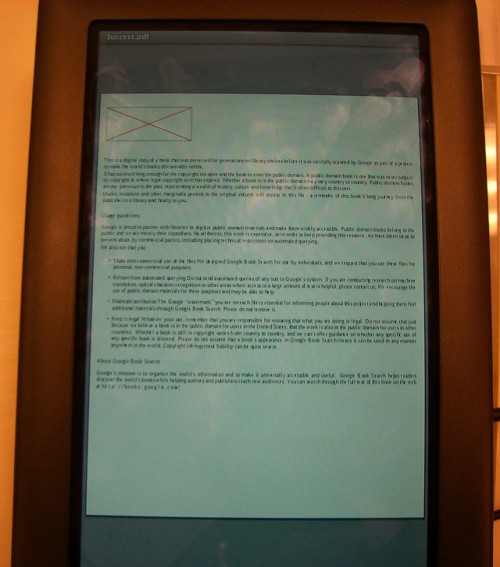 And that was the first sign of trouble. What is that placeholder in the upper left corner? That’s where the Google logo JPEG is supposed to be!

I’m going to show two enlargements of that so people can verify it’s the usual spam Google slaps in the front of their files:

But it didn’t get better as I went on:

Uh, WTF? Where’s the book? It didn’t get better at all. All pages more or less looked like that or like this: 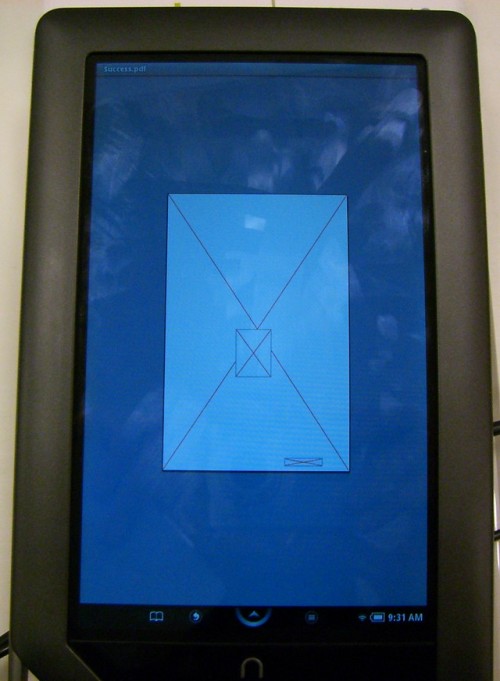 The PDF was worthless. And that puzzled the hell out of me. Because other people had downloaded test PDFs to the NookColor and I tried those (but didn’t snap pictures). They worked just fine.

Curious, I decided to download the ePub version of the file because I wanted to see what would happen with that: 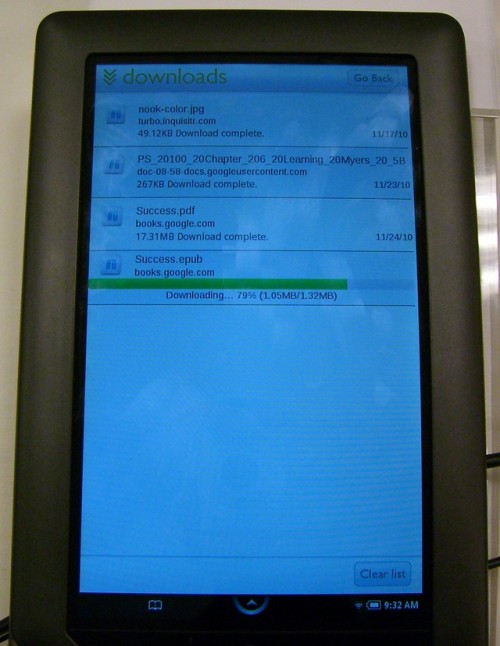 And we have Google’s spam notice in text. Then:

Houston, we have an image! So WTF? That’s the same JPEG image that should have appeared in the PDF. As I pointed out in this post, Google is very lax (to put it mildly) in creating its ePubs, making them a bizarre mixture of badly OCRed typos-from-Hell text and JPEGs that are also in the PDF version.

I have to hand it to the NookColor, though. Page turns through those images was zippy. There was no delay moving from full-page image to full-page image in the ePub (something that many eInk devices really struggle to do).

Then I decided to try something crazy. I would try to download that PDF onto an eInk Nook and see if that could read it. This Nook was running the latest version of the OS, 1.4, but it gave me this complaint: 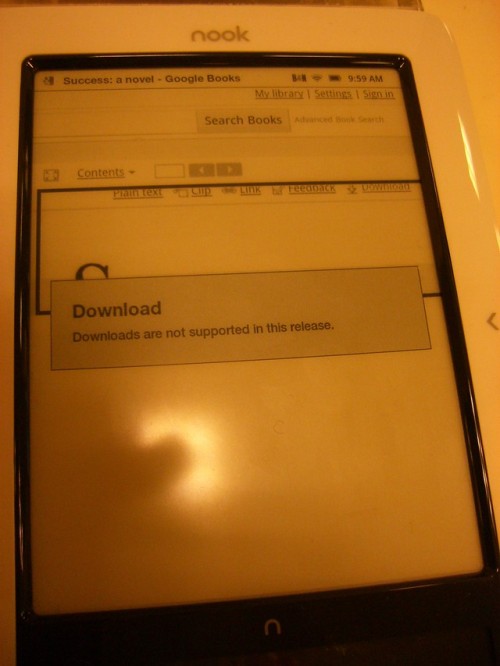 As far as the NookColor goes, forget it if you’re interested in reading Google Books PDFs.

Next up was the shiny new Samsung Galaxy Tab with the Screw You pricing of $599 out of contract. 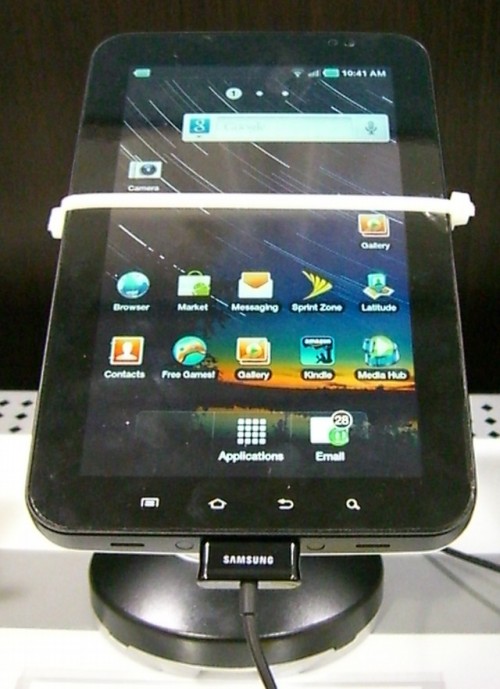 After the PDF was downloaded, I had to find it. It was somewhere in a Notification Bar. Clicking on it brought me to ThinkFree Office, which I got to de-virginize as no one before me had ever used it. After tapping the button to Activate it … 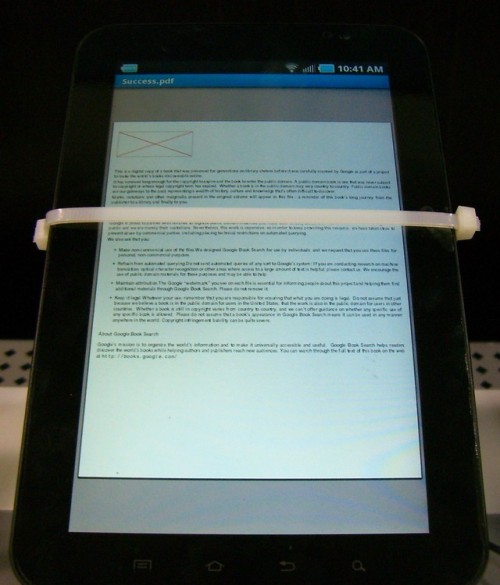 Uh-oh. We have that placeholder instead of the Google logo again!

Let’s see that $599-device not handling that PDF in some pinch-out zoom action:

So, yeah. Despite the fact the Samsung Galaxy Tab costs twice as much as a NookColor, it craps out on Google Books PDFs too!

Now let’s go to the iPad. I was especially interested in trying it on a 4.2.1 iPad. I’d tried a Google Books PDF (not this test one) on an iPhone 4 several weeks ago and the experience was pretty gory. Truthfully, I didn’t think the iPad would be any better. But I hoped!

I want you to enlarge that and see the flanking arrows I’ve highlighted because they’re important.

Those arrows do not work properly in Opera 11 beta, which I’ve switched to. On the NookColor and the Samsung Galaxy Tab, the arrows work but the scrolling of the thumbnails is sluggish and only increment by one or two instead of showing an entirely new “shelf” of them.

On the iPad, the arrows work properly!

For those of you at home who want to play along, here’s the Google Books screen with the book we are using:

And here it is in Google Books:

Now I have to tell you that file selector at the upper right — asking me if I wanted to open it in iBooks — worried me. I’d expected to be given a choice between iBooks and Pages. But I wasn’t. This was also the case with that earlier test PDF I tried on the iPhone 4. Really, I was not looking forward to going through the iBooks gore again. But, what the hell, I did it:

There’s the Google spam page. But, uh-oh! Where is that nasty Google logo?

A blank page!!! My heart sank. Is there no tablet that can handle the Google Books PDF Monster?! What hath Google wrought? What are these things that only desktops can handle them?

Tapping on the center of the PDF brings up thumbnails. And I could see that the iPad was processing the PDF. Was there still hope?

OMG! Yes! Yes! Yes!! The Google Books PDF can be read on the iPad!!

So, here is what happens. When the PDF is opened, the iPad must chew on the damned thing first. How long this will take, I don’t know. I have some Google Books PDFs that are over 350MBs in size. I didn’t feel suicidal enough today to try one of those. Maybe I will want to slit my wrists that way at a later date — or one of you reading this at home can go do it and report in a Comment — should you survive!

Not everything is smooth sailing, however. I don’t know what’s going on technically, but iBooks is only able to show clear PDF images of three pages at a time. When you hit page four, you get blur, like this:

The blur doesn’t resolve into a clear image for up to five seconds.

Not perfect. If this is a matter of RAM or coding, I hope it’s something Apple has been working on its labs.

I know that I’m probably on the edge of use wanting to read Google Books PDFs on a tablet, but dammit, that’s what a tablet should be able to do: handle Google Books PDFs for easy reading. Who wants to sit at a desktop? I’ve done that; it’s not relaxing!

For those who will defend the iPad in this by blaming Google: talk to the hand. Personally, I’m pleased the iPad can do these, even though the experience is not yet optimal. Who knows if the iPad 2 coming next year will alleviate all this with a faster CPU or more RAM? It probably will.

But for now, anyone who wants a tablet device to read Google Books PDFs, there is clearly only one choice: the iPad.