They Have No Brain But They Must Think

So the firestorm from this weekend continues and it threatens to take down someone who is totally innocent because those who view the world through a single political lens, as usual, lack reading comprehension skills.

As I noted in another post, this weekend after the news broke of the attempted assassination of the Congresswoman, my Twitterstream began to fill up with tweet after tweet casting aspersions on Sarah Palin, as if she had stood behind the assassin, personally goading him on.

I already highlighted one of those tweets:

Palin has blood on her hands.

As this litany went on, as people kept sending around the Palin map, I finally got disgusted and tweeted:

And I wouldn’t let that go, either. When it was revealed that a screensnap of the would-be assassin’s MySpace page was available, I tweeted:

Some of those anti-Palin tweets I re-tweeted, because I wanted people to see some of what I was seeing.

Moriah Jovan saw my anti-map tweets, some of those earlier retweets, and some of the original tweets too, because we have some overlap in Followers.

She tweeted in disgust:

So…will everyone be satisfied then when Palin is assassinated? You know she's next.

Now notice the timestamp on her tweet: 4:45PM. That’s right within my anti-map tweets she had been seeing. She was part of my conversation about that.

As details came out that incontrovertibly cleared Palin of any connection to the assassination attempt, the ridiculous tweets ceased. I thought that was the end of it.

Then yesterday, I got this tweet from Moriah Jovan:

If you click on that link, you’ll find the tweet from @MaxCUA it points to has been deleted. I didn’t screensnap it at the time.

What the tweet did was point to a video — which I will not embed — that some self-appointed Palin defender compiled of anti-Palin tweets. Some of the tweets are outright disgusting in clearly and overtly wishing death to Palin. But at least two of the tweets have no business being there because anyone with reading comprehension skills can correctly parse them as commenting against the pile-on. One of those two tweets is from Moriah Jovan.

I told @MaxCUA he was wrong and that probably led to the deletion of his original tweet. He said the video wasn’t his. He [update: Moriah says he did apologize and then deleted the tweet].

I Flagged and Commented at the YouTube video. I said at the very least Moriah Jovan’s tweet should be edited out of the video and one other needed to be re-examined in its context. Fat lot of good that will do. The Comments at YouTube are overwhelmingly from other people who failed reading comprehension in school.

Again, I thought this would be over. But no. Yet another self-appointed human shield for Palin popped up:

@MoriahJovan What do you mean 'she's next'?? Explain yourself. http://twitpic.com/3p7nq4

And he posted a screensnap! 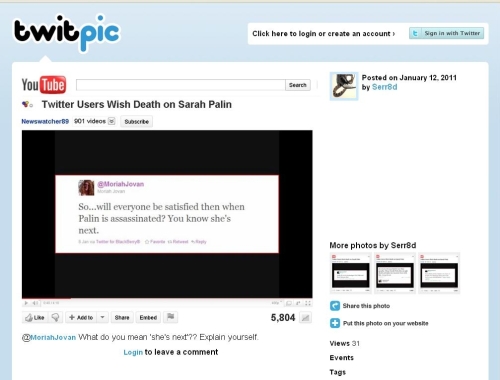 I jumped in with:

@AylaOdd @mikecane @MoriahJovan http://twitpic.com/3p7nq4 Nice 'sarcasm'. Not my video, but you made good company, eh?

And I replied back:

I also did some knocking on his skull:

Why would I invoke the sacred name of Harlan Ellison? Because this is in that guy’s Blogger profile: 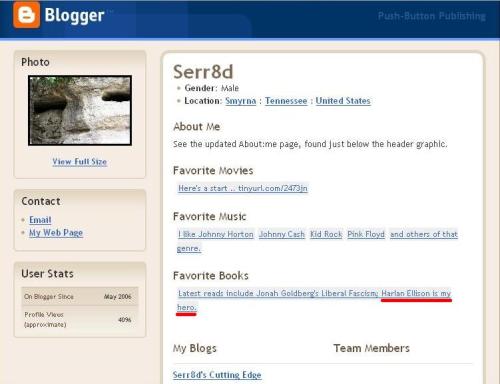 It’s difficult for me to believe he could ever have anything in common with Harlan Ellison. He is the type of person Ellison rails against. And given how he couldn’t even parse Moriah Jovan’s tweet, I doubt that even if he has read Ellison’s works, he understood any of it.

So much for his own words here.

And the madness is continuing, as yet another single-focus blog has picked up that video as if it was straight truth: ‘Can We Get Someone To Shoot Sarah Palin?’: Twitter Users Call for Palin’s Death

Which now goes to show that all of those who are defending Palin today are as rabid and narrow-minded and as dismissive of facts as the original people who were condemning Palin.

1) To clear Moriah Jovan’s name from this error. She can point to this post as the correct and indisputable context for her tweet. This is the Internet and this error might keep popping up for some time. She can send people here for the truth.

2) To again display my disgust at those who can view the world only through a narrow focus that’s been handed to them by others.

If you can’t think for yourself, if you need other people to tell you how to view the world, you have no business opening your mouth about anything. You’ve abdicated the brain God gave you at birth and you’ve become a tool, a ventriloquist’s dummy, mouthing the lines someone else has written for you.

And particularly to my fellow Americans: You don’t deserve the Constitution you’ve inherited because you don’t understand the reasons behind it or the words in it. All of you will lead to the death of the United States of America, not any outside force.

And Now We Descend Into Farce
Low Politicians Need To Meet High Ground
If YOU Do Something, Only YOU Are Responsible
We Can’t Report Potential Nuts
Indecency For Jesus
Decency Has No Nationality And No Color
Quote Of The Day: Nutjobs Edition
Welcome To The Whiplash Of 2011

17 responses to “They Have No Brain But They Must Think”