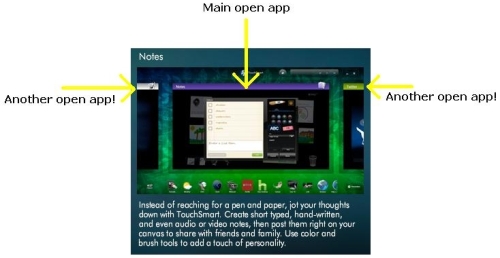 The new HP Touchsmart 610 site has a bunch of screensnaps under Touchsmart Apps. All of them are too damn small to really make sense of, but a few of them show the above, which seems to be a new webOS Card-like UI grafted onto Windows 7. These are mixed in with screensnaps showing full-screen apps too.

Aside from the site being announced prematurely — the formal introduction isn’t until Wednesday, February 9th — there’s a Buy Direct from HP button that doesn’t lead to information about the 610 at all!

See, it’s this kind of poor coordination that makes me fear for webOS. A basic mistake like this shouldn’t have happened, period.

They should have STFU about the 610 or provided full information about it. This glass half full stuff is just frustrating and makes me wonder if anyone is really in charge of overseeing everything.

After the break, two videos showing aspects of the 610. They don’t show the Card-like UI, however!

In the second video, I especially like that LinkUp feature. I expect it to also be used with webOS phones and tablets for easy file transfer (and I hope this isn’t wishful thinking on my part!).

Filed under Other Hardware, Video, webOS