According to Nate at The Digital Reader, Kobo couldn’t keep its own yap shut and broke its own embargo!

Nate has another picture at his site. The one above I swiped from Kobo’s yfrog.

Update: Second image after the break. 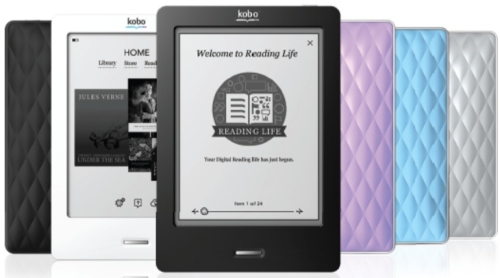 At face value, this looks great.

What I need to know:

If Borders will get off its ass, this can give them some slim fighting chance — if there’s still a market for eInk devices past the Kindle.

Update 4: Nate says it’s slow and I see what he meant in the Engadget video with an eBook being opened. Page switching itself is fast but I counted a near five-second delay in opening a book. I’m wondering if Kobo is still using its SQL database scheme for its eBooks. That would account for that delay. But look at the PDF handling in that Engadget video. That is freaking fast fast fast. Kobo is an international company and I expect this new device to do very, very well for them, especially outside the U.S..

Update 5: Never mind that. Brain fart. Apparently I’m the only person in the universe who has thought it was “Kobo Reader.” It’s always been “Kobo eReader.”