The Final Nail In The Coffin Of PBS

PBS officials told member stations at its recent annual meeting in Orlando that beginning this fall, the Wednesday science series “Nature” and “Nova” would contain corporate and foundation sponsor spots, promotional messages and branding within four breaks inside the shows, instead of at the very beginning and end.

The longest period of uninterrupted programming, according to a plan shown to the programmers, would be just under 15 minutes, compared with the current 50 minutes or more. Based on what PBS learns in the fall, the new format would continue to be introduced night by night through the year, officials said.

Listen, you have no idea how bad this is.

In the 1970s, PBS was a vibrant thing that offered a real alternative to the cultural mush presented by the mainstream. PBS did things TV network executives wished they could do. PBS had a real impact on the culture and presented things no one else did: Vietnam, a Television History; An American Family; All You Need Is Love: The Story of Popular Music; to name just three.

Vital things that needed to be done were done by PBS, because no one else would touch them.

PBS was there to cover poverty, racism, sexual politics, and more. Documentarians who had no other outlet got PBS funding and airing.

PBS was created to really serve the public interest, unlike the lip service mainstream broadcasters paid to that as part of their license mandates.

Do you think you would see The Civil War on ABC, CBS, NBC, or even any cable TV channel? And that’s not even offensive or challenging to the predominant consumer culture!

Then Reagan and the 1980s happened and the attack on PBS began in earnest. Did you really like all those fundraising drives? Did you really like seeing aging singers in stupid “specials”? Did you like seeing PBS turned over to guru hucksters pushing their books and DVDs as membership benefits? It was a disgusting travesty of what PBS used to be and was meant to be. They took it and turned it into Pottersville. 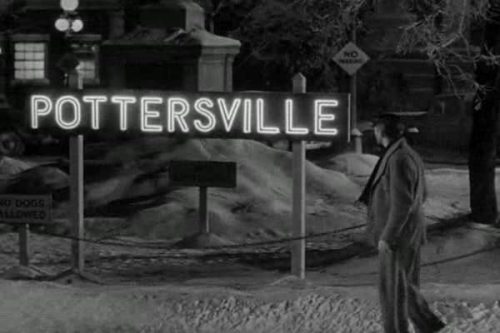 And now, with full commercial breaks, the destruction of PBS will be complete.

This is not the inevitable evolution of PBS. This is not what PBS was created to do. This is outright manipulation by those in power to emasculate dissenting, disturbing voices and to prevent people from waking up. Never mind waking up, just hearing a different point of view that might set off some independent thinking and lead to questions!

Thank god I can get uninterrupted things via the Internet. And I don’t give a shit if you lose sponsor money from it, PBS.

That’s not why you were meant to exist!

One response to “The Final Nail In The Coffin Of PBS”