I believed it too.

Jeff Bezos punked all of us.

Here’s a key slide from the announcement: 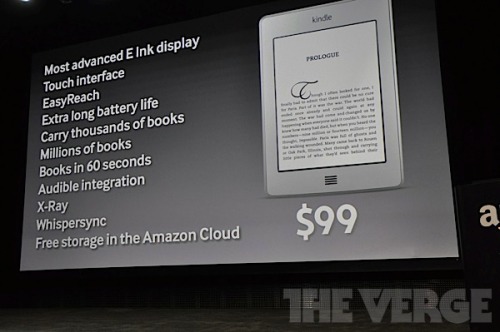 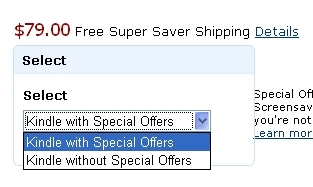 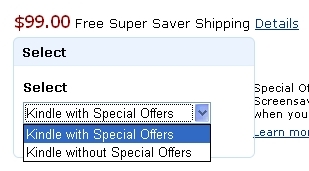 Stop to think about that for a minute.

If Amazon is giving you a $30 break like that, how much more are they making over that $30?

You’re no longer a reader.

You’re a product they’re selling to others!

Look around you on the Internet.

There was a huge outcry over the introduction of banner ads.

And look at where we are today, with popunders, popovers, rolldowns, rollovers, crawls, and more. Not to mention all those goddammed animated ads in boxes off to the side. Go to any mainstream media news site — especially one for TV or radio — and you’ll see what the endgame of advertising has become.

I’m not even going to mention evercookies, OK?

By agreeing to a measly $30 discount to sell yourself out, your Kindle basically becomes its own damn evercookie.

This is not going to stop with screensaver ads.

Jeff Bezos will give away books for free.

The books will have ads in them.

You’ll get what you think is a “free” book and advertisers will get to drop a cookie in your head for their product, Amazon will get to track what you respond to like Pavlov’s dog, and every little scummy wannabe who crawls out of the woodwork for NaNoWriMo will dominate books because they won’t give a shit about art or integrity — they’ll be making money, just like any hoor on a street corner or filthy back alley.

Among illiterates money is regarded as the measuring rod for all things: for friendship, goodness, education, power, love.

And Amazon’s X-ray feature? That’s not to enhance your reading experience. That’s to figure out where the future ads can go!

This is much bigger than getting a cheaper Kindle.

Jeff Bezos has thought steps ahead of everyone else.

Now I’ve caught up to what he’s planned — only because he’s made it so blatantly obvious to an eejit like me.

I don’t know where the hell real writers go from here.

I don’t know where the hell public libraries go from here.

But none of it looks good to me at all.

And to all of you who are skeptical: eInk won’t be here forever. There will be color, like Mirasol. Which can do animations. How much are you going to like having to watch an animated ad before you’re allowed to read the next chapter “for free”?

So is the entire idea of what we’ve known as books and book culture.