Well, this is a new nuke lobbed by Amazon.

Everyone has hated the Mobipocket file format.

So Amazon is finally dumping it.

END_OF_DOCUMENT_TOKEN_TO_BE_REPLACED

Reading through Schreiber’s papers, Nathan says it becomes obvious that the writer knew that Mason’s story was not entirely true. Memories of a traumatic tonsillectomy, for instance, morphed into a lurid story of abuse. And Schreiber seemed eager to pump up or even create drama where none existed. But if Schreiber had doubts, she suppressed them.

“She already had a contract and she already had a deadline,” Nathan says. “She was in the middle of writing the book. So she had the dilemma all journalists have nightmares about — what if my thesis turns out to be wrong as I do my research but it’s too late?”

At one point, Mason tried to set things straight. She wrote a letter to Wilbur admitting that she had been lying: “I do not really have any multiple personalities,” she wrote. “I do not even have a ‘double.’ … I am all of them. I have been lying in my pretense of them.” Wilbur dismissed the letter as Mason’s attempt to avoid going deeper in her therapy. By now, says Nathan, Wilbur was too heavily invested in her patient to let her go.

Wow. And I was just thinking about Sybil yesterday. I’d read the book in the 70s, saw the movie with Sally Field too. 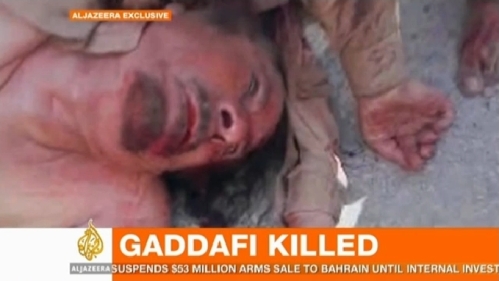 Every now and then, some tweet pops up as an RT in my stream castigating people for being glad this bastard is dead.

If Twitter worked properly, I’d go through the streams of those people for the past several months to see if they ever tweeted anything in support of the people who were killed trying to overthrow this dictator.

The Screeching Sensitives — the New SS — pop up from their sewers only when normal people are jubilant over the end of evil.

That photo stands as a lesson and as a warning to every smug ruling bastard in the world: That is your inevitable end.