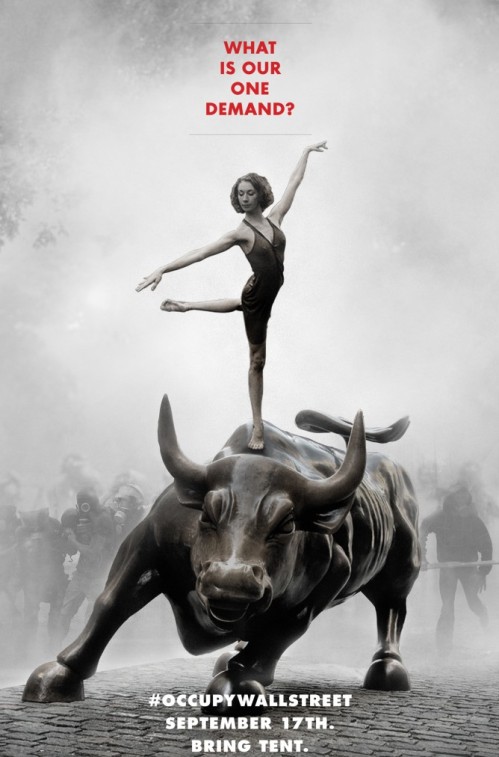 Why did it fail?

Look at that poster.

Look at the red headline in that poster.

What does it mean? Anything?

This is the original Adbusters post for Occupy Wall Street:

On September 17, we want to see 20,000 people flood into lower Manhattan, set up tents, kitchens, peaceful barricades and occupy Wall Street for a few months. Once there, we shall incessantly repeat one simple demand in a plurality of voices.

And what was that one simple demand?

The most exciting candidate that we’ve heard so far is one that gets at the core of why the American political establishment is currently unworthy of being called a democracy: we demand that Barack Obama ordain a Presidential Commission tasked with ending the influence money has over our representatives in Washington. It’s time for DEMOCRACY NOT CORPORATOCRACY, we’re doomed without it.

And some of them understood what it was about — at the beginning.

That was one hundred percent on-message.

Hell, even when I finally found them in Liberty Plaza days later — Occupy Wall Street: Day Six Photos — this was the first sign I encountered: 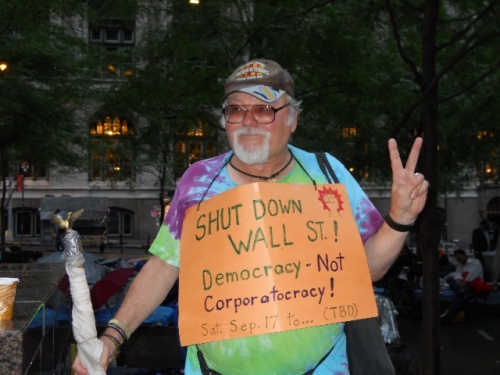 That’s exactly what it was all about. 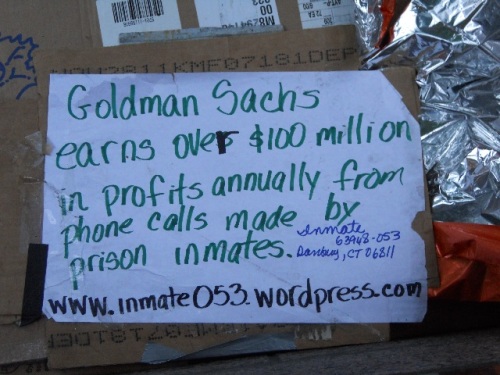 Even though that’s probably true, what the hell does it have to do with the “one simple demand” the entire thing is supposed to be about — and is trying to accomplish?

Placards such as these did nothing but alienate people:

We’d seen that message before. In the 1960s. From the pack of spoiled unwashed bastards who then went on to sell out, join Wall Street, and destroy this nation in a way no outside enemy ever could. Anyone with any damned brain, knowledge of history, or who lived through that time understood that.

… again, those with any damned knowledge of American history understand why we have a democratic republic instead of direct democracy. As would be shown in the coming weeks, the direct democracy practiced by their own General Assembly was unwieldy, prone to hijacking by side issues, and unable to act in a timely manner.

… is just generally insulting. Who the hell is to say what someone else needs? The blatant hypocrisy was already there, sabotaging the original effort. When people brought up the issue of that damned Drum Circle and how it wasn’t needed, some whiner would pipe up about “liking” it and then that one moron had to be accommodated because dismissing such stupidity would be seen as “oppressive.” So don’t go around lecturing the Normal 99% about what they “need” when you couldn’t distinguish between “want” and “need” yourself!

Most of the original intent had been lost, so much so that by October 1st — Occupy Wall Street: October 1, 2011 — I was already saying:

When you start something, you better have a goal and an end in mind.

I don’t think they ever did.

… and it was evident even to that prat Max Keiser that they’d gone into loony-land:

Really, nothing brings straight home the point of how it all degenerated than these two photos: 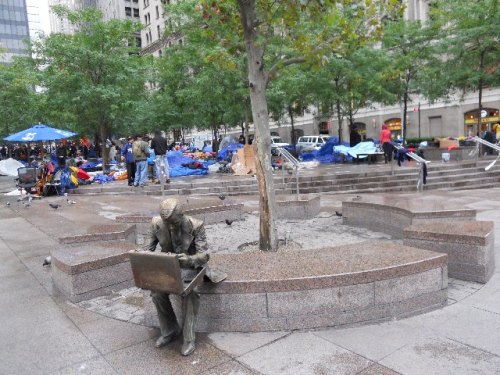 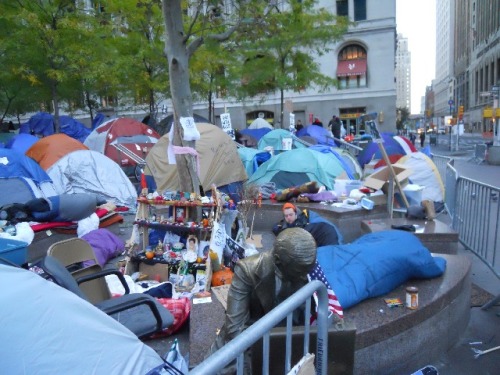 Suit Man turned into a shrine! Because, you know, going to a nearby church or walking to a Buddhist temple in Chinatown was just too impious. They had to show everyone how “spiritual” they were. It was another way of lording their self-delusional superiority over the Normal 99%.

They couldn’t even stick to that.

Had they stuck to a single message, they might have actually accomplished something.

And having done that, having shown that the people had the power to really change things by going out into the streets, they could have gone on to address other issues about how the financial system has been rigged against the average American.

Instead, the took their one single chance — a chance that is so rare and precious that people have died for it — and blew it.

They failed utterly, totally, miserably, and in ridicule.

They showed the Normal 99% that they do not represent them.

They’ve set back the cause of reform by years now and have probably done irreparable damage to that cause.

The entire idea of reform will now be linked to all the Marxist-deconstructionist anti-American anti-Normal 99% side-issues displayed for weeks in Liberty Plaza that hijacked the original intent.

Anyone who tries to speak up now will be slandered with the label of “Occupier.”

Thanks for nothing, you unfocused spoiled brats.

Previously in the Protest Category