1922: How To Market Reading And Books 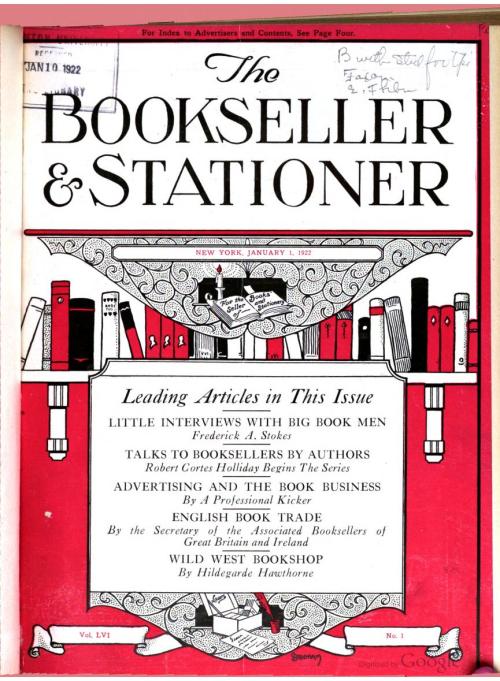 Would you believe that absolutely nothing about the marketing of reading and books has changed since 1922?

After the break, an article from the above magazine. See how someone in 1922 said the same things I’ve inadvertently wound up repeating in several posts without any prior knowledge of this article!

By changing just a few words — for example, victrola to iPod — this article could have been published today.

END_OF_DOCUMENT_TOKEN_TO_BE_REPLACED

Book Publishing: This Isn’t 1922 Any Longer

Even back then, when mail order was the rage, they wouldn’t make the sale themselves. I guess they saw that as declassé.

Yet Apple has just started up a Mac App Store, in effect urging people not to go to any store for software. Not even one of Apple’s own brick and mortar (or wood and glass) stores.

What is the value of the software industry versus book publishing?

A Commenter suggested I search the Library of Congress catalog for that rare Napoleon Hill book.

They had no record.

But I found two photos I’ve never seen before.

END_OF_DOCUMENT_TOKEN_TO_BE_REPLACED

The Hulu For Books That Never Was

It was just five years ago when both NBCUniversal and News Corp stopped complaining about YouTube and decided to actually do something about it.

They formed what is today known as Hulu.

It’s gone from being a skeletal ad-supported video streaming service to one with content YouTube can’t match and a premium tier that has over 1.5 million subscribers and prospects of future growth.

How’s that for fighting back?

The formation of Hulu should have been a wake-up call to the Big Six of publishing.

They too should have banded together to form a Hulu for Books.

END_OF_DOCUMENT_TOKEN_TO_BE_REPLACED

Is This Napoleon Hill Book Extinct?

I turned to the research experts at the New York Public Library and their nationwide search for it came up with no copies.

This book is apparently a tie-in to this lengthy piece Hill did for Modern Methods.

I’d like to know if this book exists at all. I’d like to get a replica of it (not pay through the nose for the original). The claim of letters from those prominent men fascinates me and I’d like to see them with my own eyes. I don’t recall seeing any letters like those in Hill’s other works.

I will admit to using it. It was the only tracker that enabled me to get the proper English-subtitled version of the French TV series, Braquo. A series that got good buzz from the Internet. A series that is not going to air in the United States. No one lost money from my “pirating” it. I couldn’t have paid for it even if I wanted to!

With sites like this and the lockers going down, the Revenge Effect is going to be to divide people into those who can be trusted and those who can’t be. This is going to solidify and harden the resistance of the Internet to those who claim to protect intellectual property. More will be stolen just out of spite.

And in the end, those who oppose the Internet are going to lose anyway.

Time is on the side of the Internet.

The Internet has changed the way people view property and especially outdated “territorial rights”. The children raised on that ethic will become older. And they will enter politics and they will vote and they will change everything.

All of you dinosaurs, you’re already on your way to extinction.

Good riddance to the lot of you.