Gee, Were The People Right After All?

OK, yesterday I saw my fourth Samsung Galaxy Note in the wild. It was being used by a young woman behind me in line at a supermarket in the Hood! I even asked her if it was a Galaxy Note. She said yes.

Does anyone recall this debacle from just last year?

That’s Jon Rubinstein holding up one of the smallest cellphones ever produced: the webOS HP Veer.

Look at how stupidly tiny it was:

Did it sell? Hell no.

The Veer is a smartphone announced by HP on February 9, 2011. The device uses webOS, is powered by a Snapdragon processor, and has a 2.6-inch screen.[1] The smartphone is notable for its credit card-sized dimensions (and a depth that is comparable to the size of a deck of cards).

The Samsung Galaxy Note is an Android smartphone/tablet computer hybrid (also known as a “plablet”) that was introduced in October 2011. It has attracted attention because of its 5.3-inch screen size – between that of conventional smartphones and tablets – and because of its included stylus. 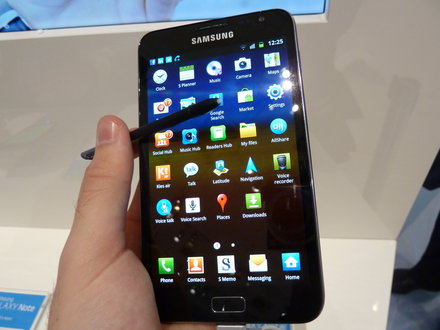 The tech press basically laughed at the Galaxy Note, while cautiously praising the HP Veer.

I never saw anyone using an HP Veer in the wild.

I have now seen four Galaxy Notes in the wild, in the hands of actual buyers, in the space of two weeks.

Samsung has a huge hit on its hands.

What Samsung has is called success.

Isn’t that what every business wants?

Gee, were the people right after all?

14 responses to “Gee, Were The People Right After All?”