All photos taken yesterday Thursday, April 12, 2012. Resampled and resized to VGA; click any to enlarge. 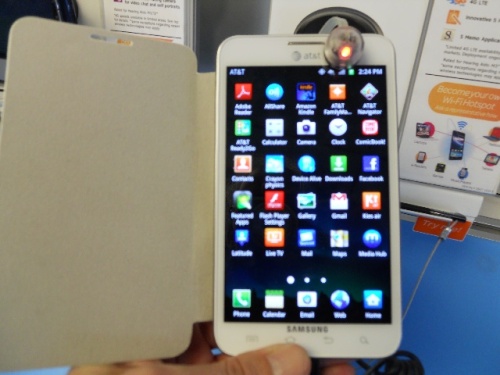 This was at an AT&T Store. It was my first time really handling it (although I saw one previously at Best Buy). 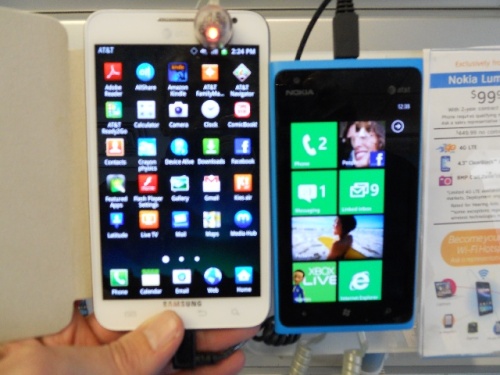 You know how Jobs wanted to create things that were Insanely Great? That AMOLED screen on the Note is Madly Fantastic! While the Galaxy Tab 7.7 screen didn’t cause me to drool, this one did. I couldn’t see a single damn pixel. And the colors are so bright and sharp — it’s just what screens should have been all along.

There were some PDFs already installed on the Note. Here’s a blurry shot of a page from one of them:

I didn’t do much on the Note. This was a small AT&T store, I was one of two “customers” in it (the other guy really was a customer, unlike me!), and the overall atmosphere was oppressive. I looked at some photos, swiped through Home screens, and just marveled at how damn fast all it was — especially compared to the 7.7, which I had just handled like three minutes earlier.

In fact, I gave a bit more attention to the Nokia Lumia 900, because that’s the New New Thing. And my earlier verdict of Windows Phone stands: It’s a botch. Metro might work well as a UI for tablets and large touchscreens, but it’s confusing and annoying on a small phone screen. Nothing at all made any sense to me. While the Nokia outer hardware was OK, next to the Note, the Lumia just seemed like a Loser Phone. Nokia should have stuck with MeeGo. Nokia will probably succeed with a Windows 8 tablet styled like the Lumia, but I don’t think Windows Phone is going to be that company’s savior. MeeGo could have been. A Lumia-like Windows 8 tablet likely will be.

I’ll be fondling the Galaxy Note again in another post in this series.

Now where is that new Coby 9.7″ tablet? That’s the next fondle. Click here to go to that part, if interested.

Other posts in this series: