All photos taken yesterday Thursday, April 12, 2012. Resampled and resized to VGA; click any to enlarge.

The trip began at a Verizon store: 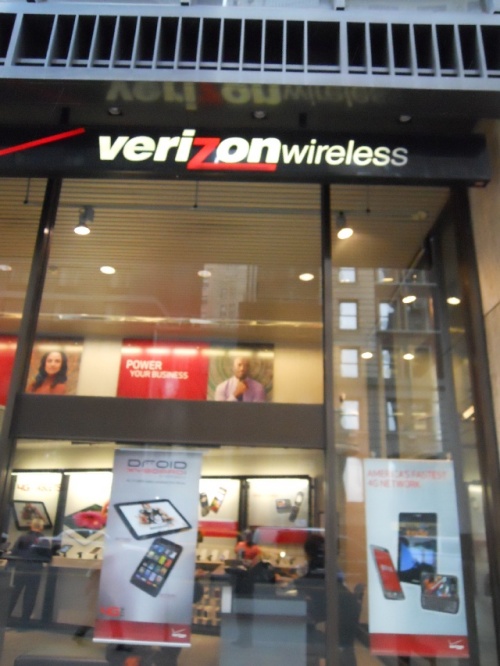 According to Samsung’s site, this stocked the new Galaxy Tab 7.7, which — until the new iPad with Retina Display — I had been lusting for. Would it still impress me post-Retina?

Well, I had to wait. Someone was already using the demo model. And he was a buyer whose own 7.7 tablet was delayed in shipment(!).

So, nearby was a Motorola Xyboard and Samsung Galaxy Tab 10.1.

I discovered something very strange trying them! This is the book app they both have. I believe it’s from Kobo. And here are each of them displaying — with all settings identical — the first chapter of Moneyball, which had a portion pre-installed as a sample: 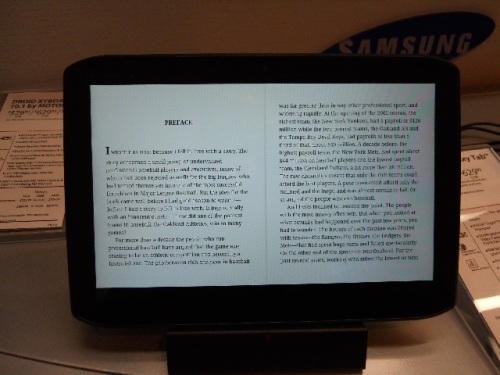 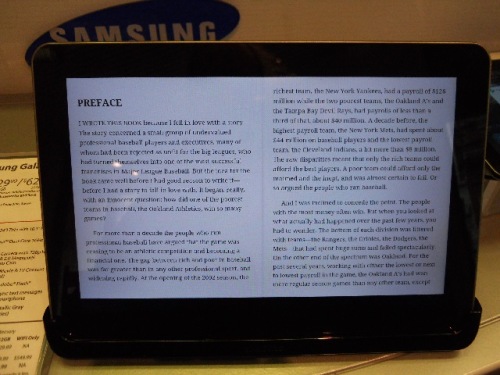 Can you see the difference? Let me help you with that:

So, you would think, “Damn, the Xyboard sucks with on-screen book typography.” But wait! Here’s the same book on the Galaxy Tab 7.7:

The text is just too blurry for me to clip out, but you should be able to see that it’s displaying the book the same as the Xyboard now — and not identical to it’s larger sibling, the Galaxy Tab 10.1!

I have no idea what’s going on. As far as I could see, the text settings were the same across all three devices. But maybe I’m wrong. If anyone out there has the Kobo app and Moneyball, maybe you can play around and explain what accounts for the difference.

Man, the accelerometer on the 7.7 — in fact, on all Samsung tablets — has an irritating delay.

A strange thing about the AMOLED screen is that when it’s viewed from a very sharp angle, it has a bluish cast like a wristwatch’s Indiglo backlight. 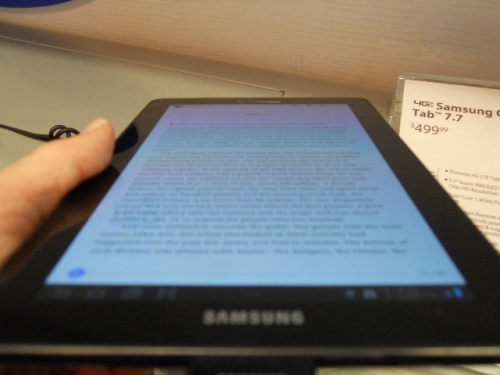 Now we get down to some testing business! My blog:

And I tried to download the PDF of my version of the test Processed World PDF but instead Google Docs gave it to me as a straight on-screen display, which was frustrating: 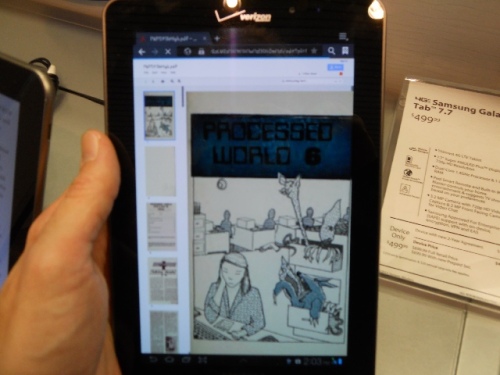 If you want to play along at home with your 7.7 and laugh at me, here is the Google Docs link for that PDF.

Focus failed on this next shot:

What I’m trying to illustrate there is some screwy display behavior. While some pages had sharp text, others wouldn’t resolve into readable text at all.

But when they did, they could be read: 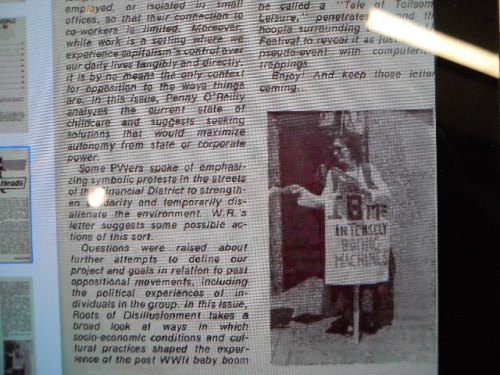 The moiré-like pattern isn’t evident in real life. That’s an artifact of the camera’s sensor. I was unable to find a way to download the PDF, so it was on to the next one!

Look! It’s the other test PDF, Success: A Novel:

If you want to play along at home: Google Books or Google Docs.

I was able to successfully download the PDF straight from Google Books. Although finding it on the 7.7 was a confusing mess. I’ll have more to say about this later.

Again, ignore the moiré-like pattern artifact. The text was sharp and readable without needing to pinch-zoom.

Although you can’t tell that in the focus fail on this next shot:

The trouble with going from page to page is that it required vertical scrolling. And there was no algorithm to horizontally constrain the page as it moved up, so it tended to go off-center a lot, unlike with an iPad. 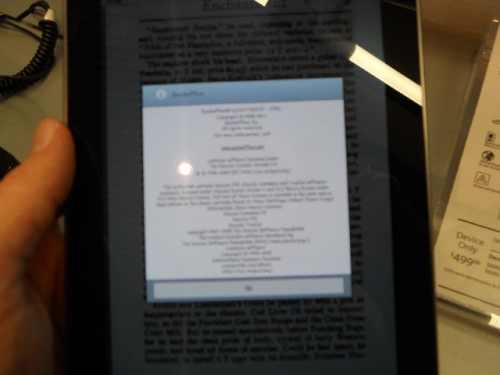 What I’m trying to show there is that Success: A Novel opened in QuickOffice, which is pre-installed on the 7.7.

Here’s a cropped-zoom of the upper left of that info box to prove it:

QuickOffice had a behavior the camera’s focus fails to illustrate here: 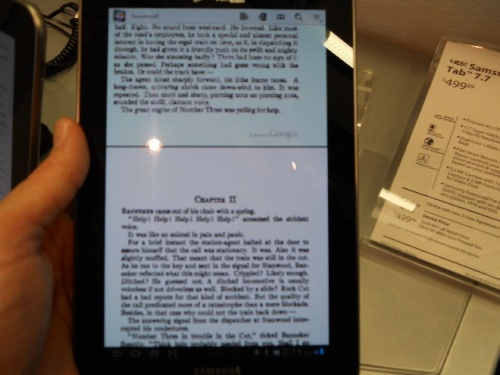 As the next page comes into view, the previous one darkens a bit and its text becomes lower-res.

So what’s the verdict so far?

Trying to view Processed World was a pain. I didn’t like that either Google or the 7.7 didn’t understand I wanted to download the PDF, not view it on-screen. I was too pressed by time to investigate further, though. On the other hand, I was impressed as hell with the speed in which it was opened. This 7.7 was connected via Verizon LTE and that was damned fast. Damned fast as in You Just Have No Idea What Wireless Fast Can Be!

As for Success: A Novel, it revealed to me what a confusing mess Android is. There’s no consistent behavior across devices so I was unable to quickly see if the PDF was downloading, its progress, or where it wound up. Trying to swipe down from the top of the screen didn’t reveal Notifications at all, from any screen (including the TouchWiz Home). I wound up using the shortcut area in the lower right corner of the TouchWiz Home screen to eventually find a list of things, one of which said the PDF had already downloaded (which surprised me!). So I tapped on that and the PDF automagically appeared in QuickOffice.

As for the PDF itself in QuickOffice, I have bad news for iPad Retina Display fans. The 7.7 just kicked the new iPad’s ass when it came to handling that PDF. I was astonished at the speed of each page’s resolution to sharp text. Really, the new iPad using iBooks was just pathetic in comparison. Now, I understand that there are dedicated PDF programs for the iPad, but at the Apple Store all I can test is the included iBooks — as all I could test here was the included QuickOffice — but still. The difference was remarkable and made Apple’s iBooks programmers seem like incompetent amateurs. I think Apple really needs to do more work to optimize iBooks for handling PDFs — because that’s the only way people can test PDF handling in stores. And Apple’s iBooks team should use QuickOffice on the 7.7 and Success: A Novel as a speed benchmark.

I moved on to test some Retina-level images from this post.

First, an HDTV screensnap from Rubicon: 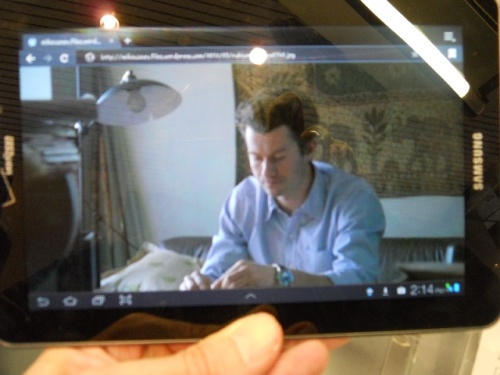 Second, a page extracted from a Retina issue of a Marvel comic book: 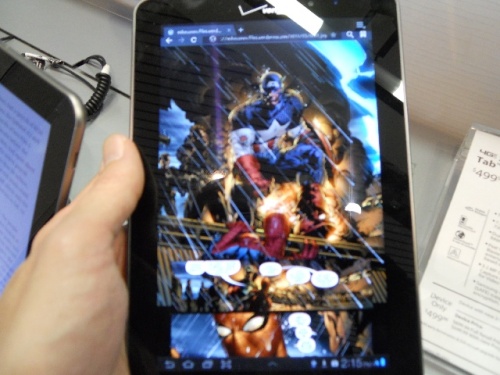 Both were very sharp and pinch-zooming in was fast and the images were still acceptably sharp. Note that the Marvel image was not automagically displayed as Fit-To-Screen. The top and bottom chrome of the browser caused some of the bottom of the image to be lost.

So what is my overall verdict of the 7.7?

I was just not impressed. And some of that is due to the wretched mess that is Android. The 7.7 is not running Android 4.0. It runs 3.2. But like 4.0, you can call up a list of apps in a scrollable left-side panel of thumbnails. Now I don’t know exactly what that list is except that in videos of 4.0 it’s been claimed those are open and still-running apps. And they can be dismissed by swiping each thumbnail to the left.

So, on the 7.7, that left panel had a monstrous number of apps listed. If they were all loaded and running, that could account for my not being impressed with the 7.7. They were the cause of it being laggy and feeling cloggy. But I couldn’t discover a way to get rid of all apps. I’m sure someone in the Comments will say, “That’s so easy! You do this…” Well look, it might be easy but it isn’t obvious! Many things about Android just aren’t obvious. While most of the things in iOS are plainly obvious.

You have to understand that my frustration is going to be even worse for everyday people who do not watch YouTube videos of tech, who do not know there’s an Android 3.2, 4.0, or any other version, who do not understand that, in this instance, Samsung is placing its own TouchWiz UI over Android.

So I think this is a factor in why Android tablets aren’t selling. Regular non-tech people try them, can’t figure out what the hell to do, and then find out there’s no similar frustration at all with an iPad — so they buy an iPad.

As for the AMOLED screen of the 7.7? Right next to it was a Galaxy Tab 10.1. Samsung makes gorgeous screens. What Sony was to TV with its Trinitron screen, Samsung is now to flat panel screens, both LCD and AMOLED. Samsung is now King of Screens. That said, I didn’t find the 7.7’s AMOLED screen eye-poppingly different, but maybe my Android frustration is prejudicing my judgment here. On the other hand, it’s not a Retina Display. And I can’t say this enough — and will say it again as this series of posts continue — the new iPad’s Retina Display has ruined my eyes for all other screens.

OK, next. As I was walking to the ferry to go on this Tour, guess what I saw in the wild in my Hood? Another Samsung Galaxy Note!!

Other posts in this series: