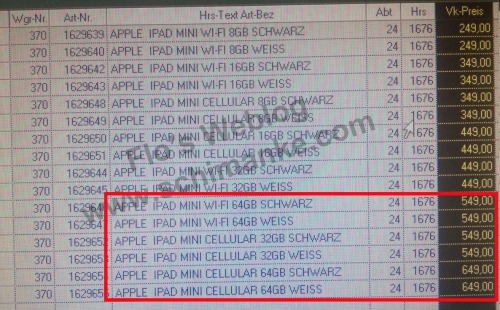 I’ve highlighted the upper-end prices. Since Apple tends to do a straight number swap between Dollar-Euro prices, that’s US$549 for a 64GB WiFi-only model. Is that the most expensive 7″-Class tablet or what? And US$649 for a 64GB cellular model (3G? 4G?) — well, I can’t even imagine someone paying that. The WiFi-only 64GB for US$549 makes me choke a bit as it is.

Is 8GBs actually usable? I can imagine someone filling their storage quickly with video — unless Apple won’t give this a rear camera, despite all the other alleged leaks we’ve seen.

On a price basis, the Mini gets slaughtered for the value it offers.

And also: It’s a freakin iPad! A mini iPad!