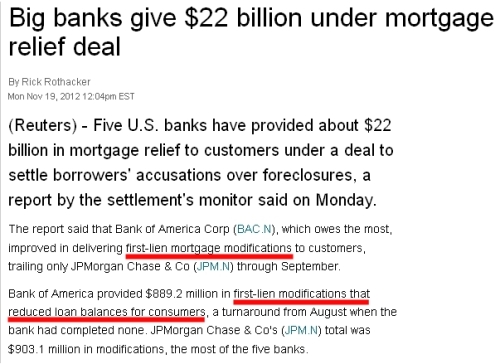 More bullshit, phony “relief” that aids the banks and not their victims!

All they’ve done is discount projected future profits. So instead of bleeding mortgage holders for a bazillion dollars, they’ll settle for a zillion dollars.

This hurts them not at all. It is pain deferred.

They should have had to void twenty-two billion dollars in mortgages.

OK, I exaggerate there.

Using their math discounting — an algorithm only they understand — I’m sure there would have been a way to for them to void at least two billion dollars of mortgages. That’s less than ten percent of what they’re allegedly “giving up” right now (an amount they will get some other way, anyway).

Two billion dollars of free homes would have done more to goose this economy than any bullshit fines paid to the government or any slight haircut in profits the banks put on their crooked books.

And if the people getting those free homes then sold them? And it made other real estate values go down?

Guess what? That’s called the free market. It what all of us are supposed to believe in and adhere to.

In the meantime, banks are not marking to market any real estate. Prices have never reached the level they would have given the severity of the economic contraction (read: crash) that’s occurred.

No bank is suffering or has suffered. They’ve metastasized into monstrous tumors on the economic body and continue to suck the life out of this country.

Until we have Jubilee-style justice from the banks, we’ll remain at their mercy.

I Want To See Jubilee Fines Imposed From Now On