Battling with the inept Google Books search facility (it’s almost as bad as Google search itself now!), I was able to extract five new things relating to or by Napoleon Hill.

Updated with a sixth thing.

WHERE MANY OPPORTUNITIES ARE FOUND TO “GET AHEAD”

In his Golden Rule articles, Napoleon Hill tells how a little old stoop-shouldered woman walked into one of Pittsburgh’s large department stores one rainy day and wandered up and down the aisles. She didn’t look like “ready money,” therefore the clerks “didn’t see” her, with the exception of one new and green employee.

This young man was not one of the regular clerks. He had only been with the store a few days. He stepped up to the old lady, helped her with her purchase, escorted her to the door and raised her umbrella for her.

As she left she asked for his card!

Later an order came to that store for furnishings for one of the finest mansions in the world. With the order came the request that this same young man be sent to oversee the installation of the furnishings. The manager of the store protested that the young man was inexperienced; that the store had more experienced men; but the customer insisted that this young man was the one she wanted to oversee the work.

The customer who placed the order and requested the services of that young man, was Mrs. Andrew Carnegie; none other than the little old lady to whom this young man had shown unusual courtesy while all the other clerks were looking in another direction.

Opportunity knocked at that man’s door and found him in!

Opportunity seldom comes in silks and satins; it seldom is heralded with the blowing of horns or led by a brass band. It usually sneaks up to us when we are not expecting it. Opportunity stands at our side from morning until night. Every time a little old lady comes along near us opportunity comes with her — opportunity at least to be courteous and receive happiness from our efforts. Every time there is work to be done which no one else wants to do, opportunity beckons us to step up and embrace her, because it is here that the first step toward leadership is taken.

The poet who wrote that opportunity knocks but once, did the world a tremendous damage!

Every time a person does one an injustice, declares Mr. Hill, he is face to face with opportunity — a glorious opportunity to prove to himself and to the world how big he is by applying the Golden Rule, forgiving and forgetting.

Every time one has a chance to get the better of his fellowman in a business deal he is face to face with opportunity — opportunity to increase his own self-respect and gain the confidence of his fellows by doing the unusual thing in not taking advantage of that chance.

It makes no difference what may be one’s calling in life, or how lowly the work he is doing at present, he has a freeman’s opportunity to raise himself into more important and more profitable work by the simple process of performing more service and better service than he is actually paid to perform.

One may know where his neighbor keeps his family skeleton. It could be dragged out to humiliate him. What a wonderful opportunity to be big enough and great enough to let that skeleton remain undisturbed.

Your competitor “knocks” you and tries to take away business to which you are entitled. Here is a fine chance merely to remain silent and permit him to defeat himself with his own weapon.

The world may say unkind things about you. What a wonderful opportunity you have to prove the world all wrong by your good conduct, your kindness toward your neighbors, your fair dealings in business, your own example of forgiving and forgetting.

Mr. Hill has his headquarters in Dallas. He gets about the country a good deal in his gathering of helpful materials for constructive living. He relates how one day when in the town of Wichita Falls, Texas, he perceived a one-legged man sitting on the sidewalk begging. A few questions brought out the fact that he had enjoyed a fair education. He said he was begging because no one would give him work. “The world is against me and I have lost confidence in myself,” he said.

There was the whole difficulty:

“I have lost confidence in myself.”

Across the hall from Mr. Hill’s office is another one-legged man, whose schooling was slight. He had less training, says the Texas writer, than the one-legged beggar. But, he is earning a thousand dollars a month. As sales manager of a manufacturing concern he is directing the efforts of fifty men.

The beggar displayed the stump of his amputated leg as evidence that he needed alms. The other one-legged man covered up the stump of his lost leg so it would not attract attention. The difference between the two men exists merely in viewpoint. One believes in himself and the other does not!

The world never defeats you until you defeat yourself. Milo C. Jones became a wealthy man out of the sausage business after paralysis had stricken him down and taken away the use of nearly every muscle in his body. He couldn’t turn over in bed without aid.

As long as you have faith in yourself and that wonderful mind with which you were endowed continues to function properly, you cannot be defeated in any legitimate undertaking.

The Hill theory is sound, for his exposition is that if you are a failure, if you are unhappy and despondent, you may see the person who is most to blame by stepping to the nearest looking-glass! Unpalatable, but true! When one begins to succeed he may put it down as a sure thing that he has commenced to believe in himself.

The thoughts held in an individual’s own mind are constantly being registered in the minds of those with whom that individual comes in contact. This is a scientifically proven fact. It may be seen then, how necessary it is for a person to think well of himself. It is why one ought to believe in his own ability to accomplish all that he undertakes.

The line which marks the difference between the successful and the unsuccessful man is definite and easily removed. One believes he can do all that he undertakes and goes ahead and does it; the other one believes he cannot accomplish anything, so he never begins! Mr Hill suggests this formula:

“If you want to witness a marvelous transformation in yourself, commence now and for ten days stand before a mirror for ten minutes each day, look yourself squarely in the eyes and say — ‘I believe in you; you can finish everything you start; you can induce people to like you; you can get people to favor you by first favoring them; you can win people’s confidence by placing your confidence in them.’ The result will be startling.”

In the New York office of the general sales manager of a very large machinery manufacturing concern there hangs a sign which is the best commentary of the kind we have ever noted. It tells of a chap who was so simple that he didn’t know a certain thing could not be accomplished, so he went ahead and did it! The greatest obstacle in the way of accomplishing anything will be found usually in the mind of the person who admits its desirability but is assailed by doubts! 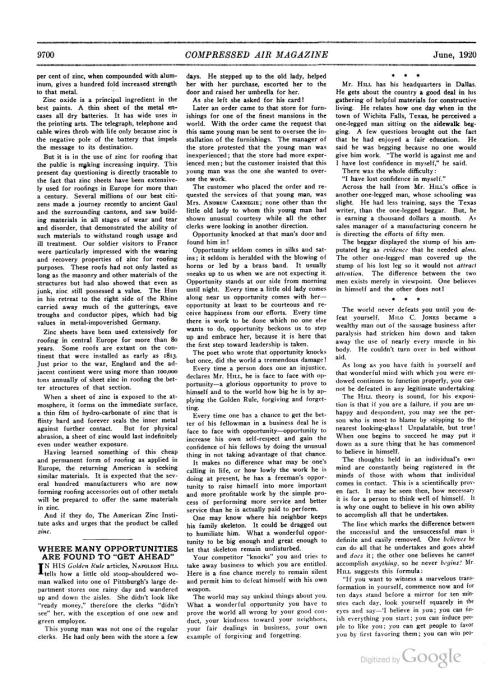 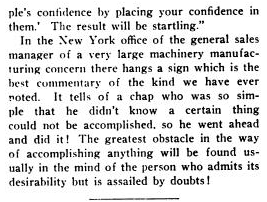 That story about Mrs. Carnegie? It comes from Succeeding with what You Have by Charles M. Schwab, published in 1917.

For more than four hundred years America has been the one spot of ground on this old ball of mud which offered refuge to the down-trodden people of every other country on earth!

America stands today as a willing host to all who seek her shelter, regardless of their political, religious or economic views.

A few people have come to our shores for selfish purposes. These people are carrying on a systematic and subtle propaganda for the purpose of stirring up strife and agitation.

Just now these unpatriotic, selfish and ignorant agitators are bending every possible effort to gain control of organized labor and persuade the rank and file of labor to tear down instead of build up.

Already enough harm has been done to undo practically all the constructive work the labor unions have done in the past thirty years.

No civilized country will tolerate mob rule for long, and any individual or set of individuals who allows the mob spirit to prevail will permanently lose the respect of the great middle class.

Organized labor is suffering a cankerous retrogression that will eventually eat away its vitals if it does not eliminate the cause. The cause is the “fire eating” revolutionist who is using labor as a cat’s paw with which to tear down organized society.

Will labor rise to the situation and throw off this leech which is sucking away its life-blood, or, will it remain silent and finally sink into oblivion?

Organized labor needs sober, wise and patient counsel as it never needed it before. Without this the cause of labor soon will be considered on a parallel with anarchy, revolution and utter lawlessness.

Who among the leaders of labor will be the first to see this danger and head it off? 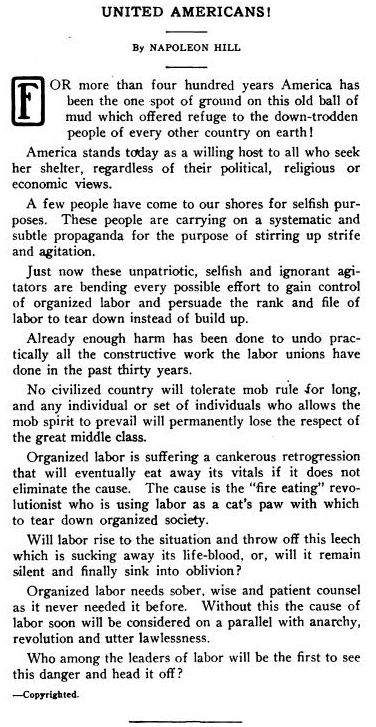 “No payment is made for contributions.”

From a 1960 issue of Popular Mechanics: 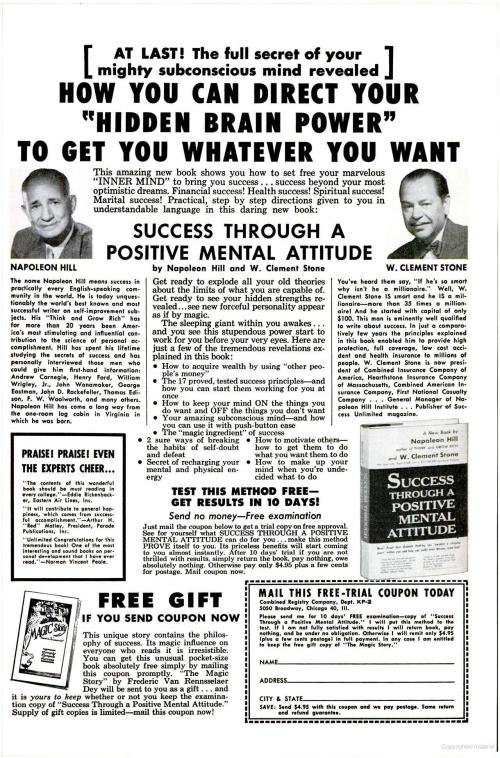