The 1920s Scheme To Create A National Bookstore Chain

Continuing my research into Napoleon Hill, I came across a remarkable thing in an issue of American Stationer and Office Outfitter:

The following prospects, printed on a page leaflet, has been sent out by the United Bookstores Co. of America:

An opportunity is presented to a limited number of persons interested in wider and more profitable book distribution to participate in a strictly business enterprise for this purpose by becoming members of a syndicate to promote the United Bookstores Company of America.

The syndicate has been formed by the interests responsible for the United Bookstores Company of New York (capitalized for $3,000,000 and now in a process of formation with a number of paying New York City properties as a nucleus), and will organize the United Bookstores Company of America as a holding company for the New York concern and for four other subsidiaries to be organized in California, Louisiana, Illinois and Canada.

The purpose of the United Bookstores Company of America is to improve the machinery for book distribution and to increase the number of merchandising outlets for books and high grade stationery through the installation and operation of a national chain of retail book and stationery stores. These stores will be standardized in appearance and interior design and modern efficiency methods will be applied to their management. The company will purchase for all stores in its chain and for certain non-competitive stores, thus securing extraordinary price concessions and eliminating the profit of the jobber. The nature of the company’s activities will also cause it to supplement, in a profitable way, the educational work of the Carnegie Libraries. No such chain of stores is in existence at the present time in either the United States or Canada, although the W. H. Smith Company of England has scored a tremendous success with a chain similar to that which the United Bookstores Company of America intends to establish. The plans of the company have been approved by publishers, stationers, and bankers, and the leading publishers and manufacturing stationers of the country will be requested to designate directors. The company will be incorporated under the laws of the State of New York and will be capitalized for $50,000,000. Its financing will be handled in Wall Street.

In order to provide the funds necessary for the organization expenses of the company, and to permit those most interested in the success of the enterprise to participate and advise, the United Bookstores Syndicate has been formed and is now receiving contributions in multiples of $50 from authors, publishers, writers, educators, booklovers, booksellers, stationers and others interested in the subject. The fund so created will be used solely for the organization expenses of the company. Upon the company’s incorporation the syndicate will be dissolved and its members will receive for their services in establishing the fund $100 in 8% cumulative preferred stock of the United Bookstores Company of America for each $50 contributed. The members of the syndicate will be the company’s founders and their names (publishers, booksellers and stationers excepted) will, if the member so desires, be used in all literature descriptive of the company. This represents an unusual opportunity to double the amount of a small investment while participating in the greatest enterprise in the history of the book and stationery trades.

Legal matters in connection with the syndicate have been passed upon by Messrs. Kisselburgh and Egan, New York City. The right is reserved by the Syndicate Managers to reject or prorate any or all contributions. Checks should be made payable to the Treasurer, United Bookstores Syndicate.

Communications should be addressed to:

Several points right off the top:

2) That’s just not how things work! You don’t raise a ton of money and then BOOM! wind up with a chain of stores. That’s never happened in the entire history of mankind! McDonald’s started with one store. So did Sears. And Wal-Mart. Everyone started that way — and still does.

3) I have no idea what happened with this. Google search points mainly to results in Google Books. I have never before heard of this in all of my reading about books and publishing.

And that’s not all. They spent some money publicizing this venture, with press and ads in American Stationer and Office Outfitter, Bookseller, Publishers’ Weekly, Aerial Age, and Flying (I guess they figured the rich read those last two).

Here is the coverage and advertising I could find (click to enlarge):

American Stationer and Office Outfitter (see top of post, plus): 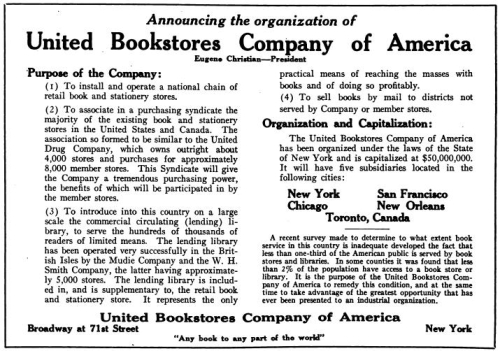 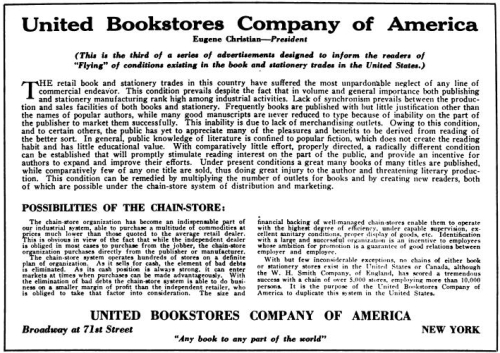 And no, I did not accidentally run an ad twice. There was no “second” ad in that run of issues! 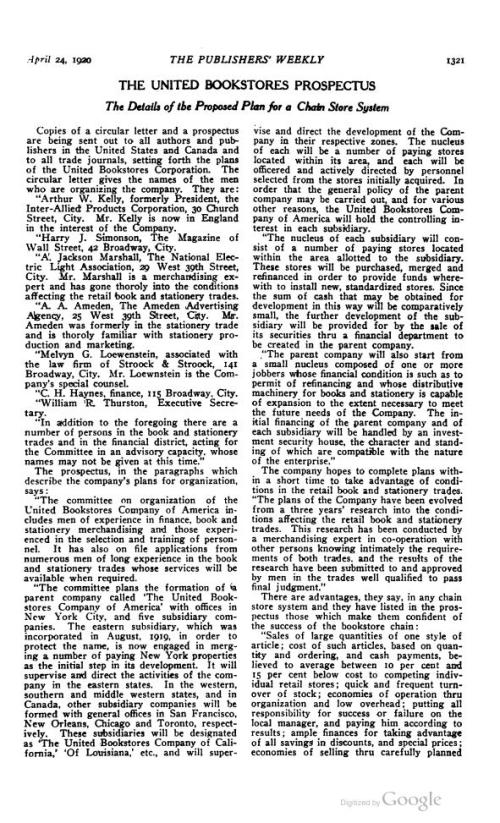 The names in that list really don’t lead anywhere. There are no Wikipedia entries for any of them and search brings up scattered, minor mentions without mentioning this venture. You would think something would have shown up somewhere. Frankly, I was hoping to uncover a huge scandal involving financial fraud. However, nothing.

I’m also surprised there was no contemporaneous follow-up by anyone.

So, we’re left with a financial and bookselling mystery.