I’ve been seeing a lot of contradictory AnTuTu score information in my research into Chinese iPad Mini clones.

Here is just one head-splitting example.

This is the AnTuTu score for the Ramos X10 from a YouTube video: 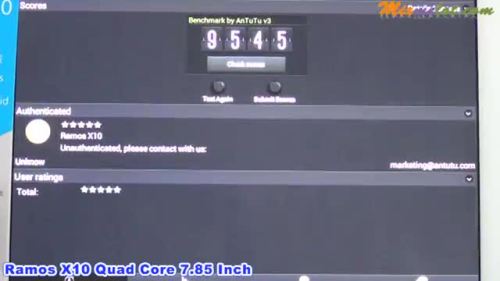 And just minutes ago I encountered this alleged AnTuTu score for the Ramos X10: 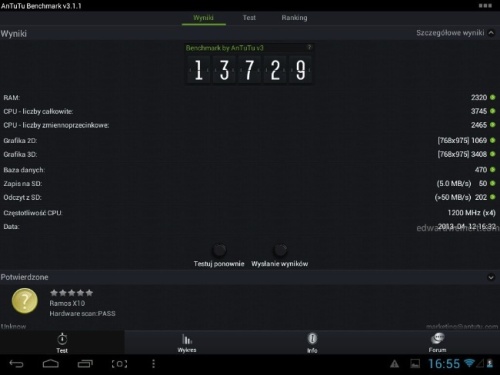 Now just wait one damn minute here. They can’t both be right, can they?

What makes me suspicious of that second score is that it’s reporting the X10 has 2GBs of RAM. It doesn’t. It has just 1GB.

Despite a watermark on that screensnap with a website name, I’ve had no luck tracking it down. Google search is no help because the Ramos X10 has been SEOed to death there, bringing up mostly sellers. If you have Photoshop skillz and can extract the website name (it overlaps the date), let me know what it is in Comments.

As it turns out, there’s a fake AnTuTu test that could account for this score inflation.

This really calls into question the trustworthiness of the Chinese sites I’ve been relying on for accurate review information. For example, one site has been praising the Actions ATM7029 CPU — which is what Ramos X10 uses — while another has been dissing it as being too weak! Trying to appraise the reliability of this information is only compounded by the miserable Chinese-to-English work of Google Translate, which can turn sentences into near nonsense.

It doesn’t help matters that some of these sites seem to run “advertorial” content, which touts these tablets. These sites are also heavily reliant on advertising from both tablet makers and online tablet sellers. I feel as if I’ve entered the world of Phineas T. Barnum. It’s very difficult to assess what’s real and what’s marketing — and what’s outright corruption.

So until I’m able to sort all of this out, take all AnTuTu scores you see — even here from other sites — with a big fat grain of salt until sources have been verified as trustworthy.

One response to “Just How Prevalent Is AnTuTu Score Fraud?”