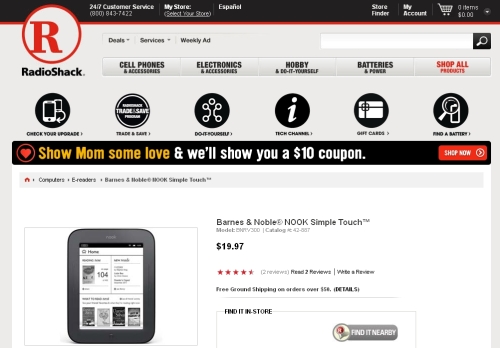 This is not a joke.

Staples stopped carrying the Nook series a while ago, so don’t look for it there. This is a Radio Shack special, just as the HP TouchPad fire sale was mostly a Best Buy special.

All of you eInk addicts had better go grab it.

Let me remind all of you that it can be turned into a passable Android tablet — and that includes using the Kindle app. It can also be an early 1980s Macintosh too. Click here to see all of my posts about Nook Touch rooting with embedded YouTube videos by people who have done it.

At one time, I would have jumped at this. But going through the trouble of rooting just isn’t worth it to me any longer. So the rest of you go have that fun.

If Microsoft goes all-in by purchasing Nook Media, why not go all-in and purchase Nokia too?

Nokia could get that 7.2-inch Windows RT Nook Tablet out for year’s end.

It’d be stylish too.

And have a great camera.

(And for the doubters who disbelieve a Windows RT Nook will be here later this year. Do you really think Nook Media can afford to miss the holiday sales? And do you really think they can fob another Android tablet off on people now? The answer to both questions is No.)

Chuwi V88 Notes From The Net

Some people are winding up with a Chuwi V88 that has an unresponsive touchscreen. It seems an assembly flaw is to blame, not firmware.

The cure is to open up the V88 to properly seat a cable: [FIX] Touch Screen Not Working There’s at least one photo there, but you must register to see it (I have not).

Two posts over at Slatedroid excite me.

One positive about this tablet is the web browsing speed is top notch, faster than my iPad Mini no joke…must be that 1.6ghz quad core vs. the 1ghz dual in my iPad.

Agreed, this is one fast tablet, I just rooted and installed the adblocker I use and its even smoother on the web, leaves my iPad mini for dead :-)

END_OF_DOCUMENT_TOKEN_TO_BE_REPLACED 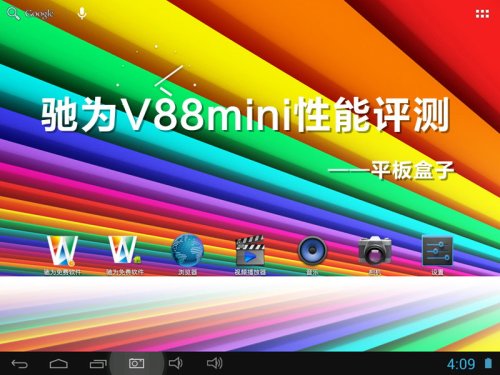 After their unboxing, they’ve done a review.

END_OF_DOCUMENT_TOKEN_TO_BE_REPLACED

Pipo has released a new Android tablet. They think this will attract buyers to it: 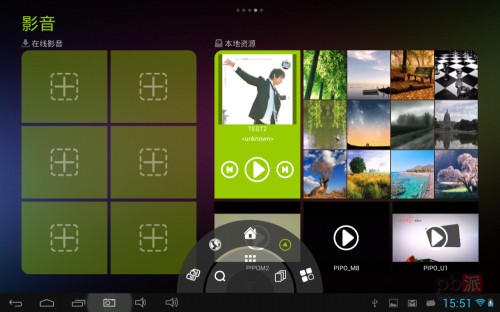 That’s not the worst of it.

END_OF_DOCUMENT_TOKEN_TO_BE_REPLACED

YouTube Is To Video What Amazon Is To eBooks

Google does not have the semi-benevolent reputation of Amazon, however, so there will be trouble ahead.

While each of these channels celebrate the building of their brand and audience, they’re also building the brand and audience of YouTube. And what happens when the day comes — and it inevitably will — when Google and them can’t come to happy contractual terms? Where do the channels go after YouTube? Where’s the B-channel? Vimeo? Dailymotion? Once upon a time there was Veoh, but that’s just about dead.

People like to talk about how technology makes “one winner” — but these single winners create a lot of eventual losers downstream.

I hope Marissa Mayer at Yahoo is paying attention. If she is, she’ll grab Hulu while she still can.

And So The Next Nook Will Be Windows RT

Wherein others confirm what I already told you:

March 22: The Sad Slow Ending Of The Nook
March 29: All Nook Tablets Are Now Orphan Devices
April 13: Rumor: Microsoft To Do 7.2-Inch 4:3 Tablet

What I didn’t expect was that Microsoft would be stupid enough to go All-In with Nook Media. But Microsoft has not been the most rational corporation recently, what with Windows 8 tanking PC sales and the Surface going nowhere. Ballmer probably figures it’s easier and faster to buy an existing firm than to negotiate from scratch all those licenses Nook Media has.

The documents also reveal that Nook Media plans to discontinue its Android-based tablet business by the end of its 2014 fiscal year as it transitions to a model where Nook content is distributed through apps on “third-party partner” devices. Speculation about the plan to discontinue the Nook surfaced in February. The documents we have are not clear on whether the third-party tablets would be Microsoft’s own Windows 8 devices, tablets made by others (including competing platforms) or both. Third-party tablets, according to the document, are due to get introduced in 2014.

Nook e-readers, meanwhile, do not appear to fall into the discontinuation pile immediately. Rather, they’re projected to have their own gradual, natural decline — following the general trend of consumers moving to tablets as all-purpose devices.

Techcrunch can rely on leaked docs all it wants. I’m telling you there will be a new Nook tablet this year and it will run Windows RT.