Xiaomi is a company that’s cool in China. They’ve previously done smartphones and now it seems a tablet — rumored to be called the MiPad — is on the way. Here’s a blurrycam leaked photo: 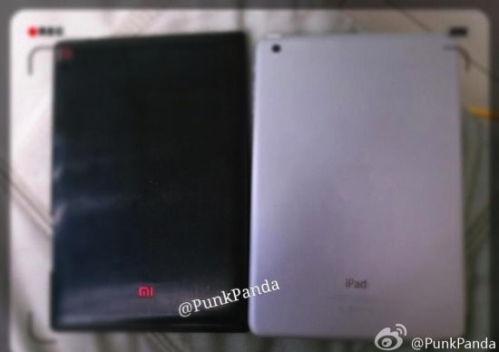 Although that’s supposed to be an iPad Mini on the right, it lacks the Apple logo. Anyway, I’ve confirmed that the Xiaomi MiPad is the same size as the tablet on the right. That makes it a 7.85-7.8-inch size screen, not the 7-inch screen other reports have stated.

Specs are still unsettled, with one report claiming a dual-core and another report a quad-core CPU. All reports point to a MediaTek CPU.

Since Xiaomi’s products have limited production runs and sell out quickly in China, it’s unlikely anyone will be able to get a MiPad internationally. Still, this is an interesting product that I look forward to seeing released and reviewed. It might raise the bar on iPad Mini clones.