Rumor: AllWinner To Do Windowed Android Too

I won’t call theirs MultiWindow Android.

A forum post at 1Pad [Google English] claims to have two photos of an AllWinner-based tablet running windowed Android, with the further claim that AllWinner is working on this to bring to its partners — including those tablets using its dual-core A20 CPU(!).

Here are the photos: 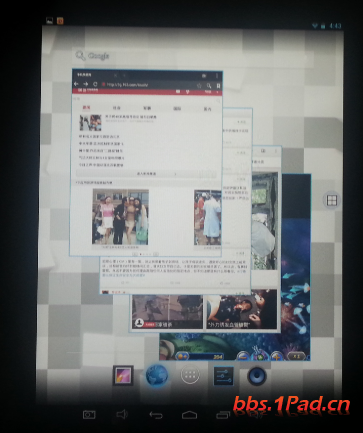 The top window is a browser, the second one looks like a forum, the third one a news site, and the bottom one is a game.

Over to the right is a circular button nearly identical to the Sorting button Rockchip is using for its MultiWindow Android.

I can’t tell what tablet that is. The wallpaper isn’t one that’s a default for current iPad Mini clones using the AllWinner A31s.

If this is true, it will instill some new life in the AllWinner platform — at least in terms of competing against Rockchip-based tablets. On the other hand, the AllWinner A31s has an AnTuTu score that’s about one-third lower than the Rockchip 3188. That makes me wonder just how well such a windowing feature will work on that platform.

8 responses to “Rumor: AllWinner To Do Windowed Android Too”