Voyo A18: The First Retina-Class Android Tablet Worth Buying? 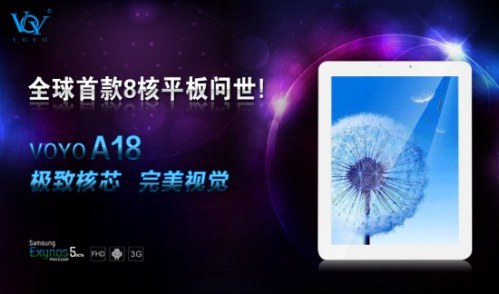 Now Voyo has come along and is putting an octa-core Samsung Exynos 5410 CPU in a Retina-class tablet [Google English]. This just might be the first Android-based Retina tablet out of China that’s worth buying.

If you’re not drooling, you should be!

This is the same CPU in the Exynos variant of the new Samsung Galaxy S4 phone! Engadget clocked it with an AnTuTu score of 28,167.

So what does the Voyo A18 do with AnTuTu? 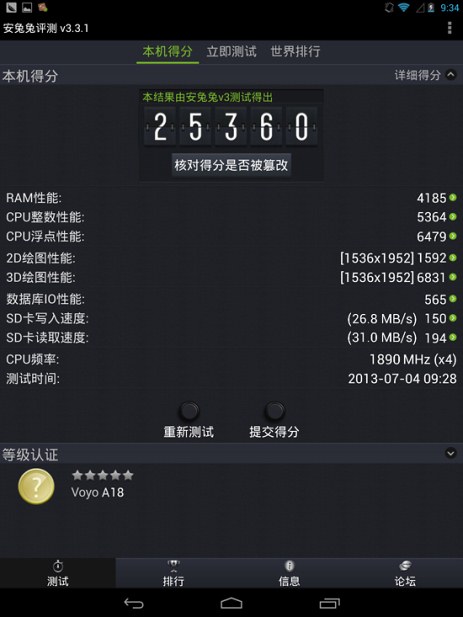 Lower than the S4, but that’s still a damn good score! A lustful bump above the 17,000-range of the Rockchip 3188 in the Chuwi V88, ICOO Fatty 2, Vido Mini One, and others based on that platform.

Now imagine if Google added multiwindowing to Android 5.0 and did it somewhat like Rockchip. You could have four iPad Mini screens (1024 x 768) on that Retina-class display. Except they’d be better than the iPad Mini screen itself — because the pixels would be Retina-sized!

This is a very exciting development.

I have no experience with Voyo — hadn’t heard of them until today — so whether or not this particular tablet is worth risking money on, I don’t know. But you can be sure that if Voyo is doing a Retina-class tablet like this, other Chinese manufacturers with more familiar brand names will jump in too.

Update Friday September 13, 2013: It is doubtful this tablet will be worth buying. After reviewing this new post — Again: Avoid All Chinese Retina-Class Tablets — and looking at that AnTuTu screen above, the throughput of internal storage doesn’t even come close to that of a Retina-class iPad. I’ll still wait to see actual reviews — and, more importantly, owner reviews — but the math looks like it’s just not going to be there. We’ll see if it’s any better than 3188 and A31s versions, at least.

Update Saturday January 11, 2014: The Voyo 18 is a waste of money. Just go read this forum post [Google English]. Nothing that bad should have ever made it to market whether or not everything can be fixed via software updates. It’s just inexcusable.

And this many months later, this latest owner reports that the Voyo still shuts down prematurely before the battery is at a critical level. That 26,000-range AnTuTu score is no longer as impressive as it was last year. I still say to skip this tablet.

Second Update Saturday March 1, 2014: I should have read further into the post. A second AnTuTu score was posted:

Well, that’s more like it. A 2,000 point difference does matter. The owner mentions less crashing than earlier buyers reported, suggesting firmware fixes have taken place. But Voyo is still a brand I’ve never heard of before this tablet and their debut of a very buggy tablet does not inspire confidence in their company. I still say to skip it.

17 responses to “Voyo A18: The First Retina-Class Android Tablet Worth Buying?”