IMP3Net has done an excellent analysis of Rockchip’s SDK 2.0 meant to improve the performance of existing 3188-based Retina-class tablets [Google English].

While certain aspects of tablet functionality are improved, the actual limitations are in the hardware — and go beyond the CPU and GPU.

RK3188 memory for single-channel 32bit DDR3, in theory, the machine has a bandwidth of 0.528 × 32/8 × 2 = 4.224GB / s, the actual effective bandwidth available to smaller than this will be a lot. As we all know, domestic retina flat-panel’s screen configuration is the to imitate new iPad from. But Apple iPad 3’s 4 × 32bit LPDDR2-800 memory bandwidth of 12.8GB / s, even so in some cases iPad 3 fluency is still subject to criticism. Apple’s latest iPad 4 so the memory upgrade for the 4 × 32bit of LPDDR2-1066, bandwidth is a staggering 17.056GB / s. iPad ultra-high of memory bandwidth on a mobile platform basic yes second to none, for the retina-screen under the need to per second huge throughput is computed speaking, this is the most solid guarantee, so even is the equipped with the memory capacity twice the Yu iPad, still unable to resolve this limitation. Moreover This also is not the older ARM Mali-400MP4 heel the iPad 3 SGX543MP4, iPad 4’s SGX554MP4 high specification GPU the performance gap between, RK3188’s GPU in the 594MHz under the handling capacity is about 23.76GFLOPS, iPad 3’s 250MHz GPU for the 36GFLOPS , iPad 4’s 280MHz GPU for the 80.64GPLOPS (this data may not be entirely accurate). In terms of bandwidth bottlenecks and GPU performance under the constraints, including the RK3188, and other a lot of CPU want to truly fluency driven by retina-screen still there are tremendous pressure.

This is why I said I think AnTuTu 4.0 is going to reveal a lot of things people didn’t know about current tablets. It will measure memory performance too. Manufacturers who have been trying to get away with the cheapest memory are going to be exposed.

And here’s what SDK 2.0 means for an AnTuTu score for the tested Teclast P98HD tablet: 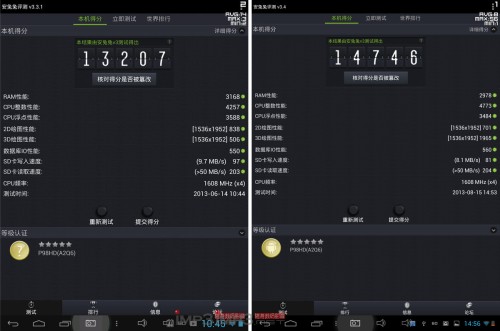 That score is below the 17,000 range of the Chuwi V88, Vido Mini One, and ICOO Fatty 2. For a Retina-class tablet! That’s absolutely painful.

And remember, that tablet is using the Rockchip 3188. Imagine how poorly a Retina-class tablet using the AllWinner A31 CPU must do!

There’s no justifiable reason to buy any single existing Retina-class tablet from China. The pretty screen is just lipstick on a pig and users will quickly become frustrated by the tablet’s lack of strength. It’s as if instead of buying a modern PC, you went and bought a now-underpowered PC from several years ago. Why waste money that way?

The good news is Rockchip is working on a more powerful CPU and other companies are adopting the octa-core Exynos 5410 CPU. So the situation will improve — somewhat. There’s no telling how much until the products are out and have been subjected to AnTuTu 4.0.