Even if you have no interest in the Onda V819 Mini, these reports are important because they’re about one of the latest tablets with the Allwinner A31s CPU. I expect them to reflect on the upcoming A31s-based Ramos K1 tablet too.

China has perfected the art of astroturfing. Although forum posts read as if they’re independent buyer reviews (as do manufacturer-supplied copy that sites run as full articles!) — including questioning benchmark results — their comprehensiveness and arty photos betray their origin. In addition, anyone who has read forum posts for several months recognizes the same posters doing these reports, despite the brand.

Knowing all that, astroturf posts can still be valuable sources of some information. Especially when forum participants chime in to call out fraud or to complain about certain brands or tablet specs (the consensus opinion is that every tablet should have 2GBs of RAM).

Astroturf posts are also indicative of a tablet finally and actually being on sale. Some manufacturers — such as Five Technology — milk the hype cycle, drawing it out for months, making it difficult for non-Chinese users to ascertain if a tablet is actually on sale or not (seller listings are no help; they’ll be glad to hold on to your money for weeks and weeks).

With all that as necessary preface, we get to the new astroturf posts for the Onda V819 Mini, an updated version of the Onda V818 Mini.

It has lots of images so be prepared for them to load and to have to scroll through the first part of arty unboxing photos and over-the-top (“this is an incredible miracle”) product hype, the second part about the screen (more hype), to the third part about the Allwinner A31s CPU (even more hype) where the AnTuTu 4.0 score is posted:

Which is called “remarkable” — and not at all suspicious. Keep that in mind for later. 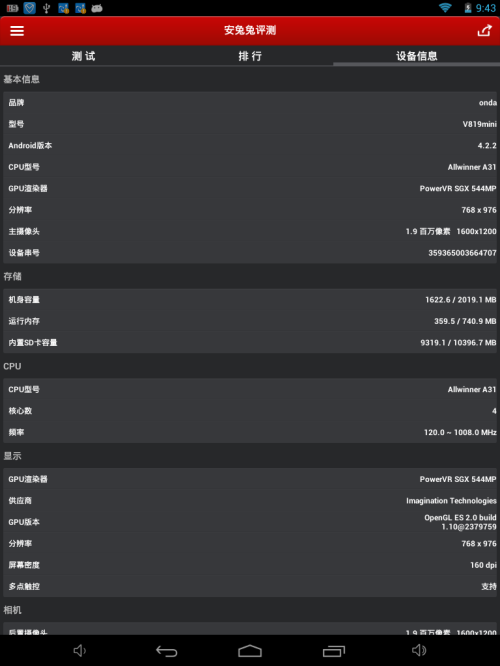 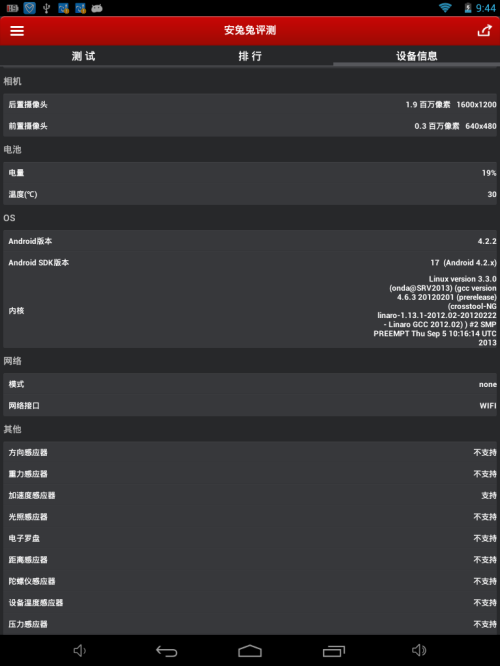 There is no Bluetooth.

It can be charged via a USB port and a USB AC charger is included in the box. I emphasize that because it’s important to some people. It’s not a selling point to me.

After that scant benchmarking (note no NenaMark2), part four covers games. There are several embedded videos demonstrating gameplay, none of which I’ll reproduce here.

In the fifth part, conclusion, he mentions it lacks Bluetooth. He also describes how to take a screensnap — remember that as you read on.

And that concludes that report.

This second report, by someone else, is spread across — at post time here — three forum threads.

His first report is an unboxing [Google English] with photos that are too good not to be astroturf although he claims he’s just a tablet buyer.

His second is a superficial comparison to the CUBE Talk 79 tablet [Google English].

The third part is where the real information is [Google English].

Onda is still doing some customization of Android.

Here are the AnTuTu 4.0 spec screens (images not as large as the prior ones): 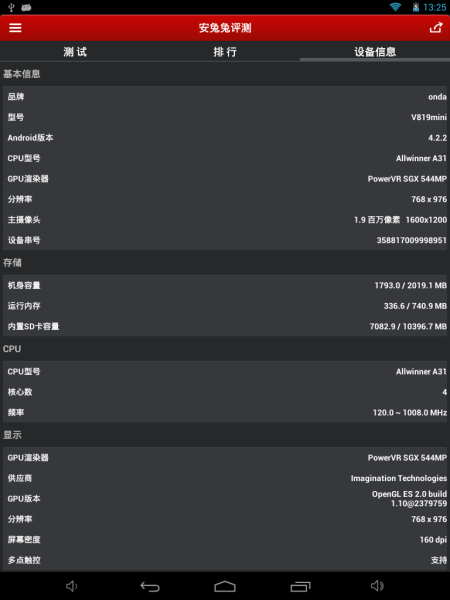 In addition to the specs earlier, this poster mentions there’s no compass or gyroscope. And although no gravity sensor (accelerometer?) is detected, there is one. And while there’s no ambient light sensor, Settings has “Smart Backlighting” (I wonder if that adjusts the backlight solely based on remaining battery life?).

Significantly, there’s no option in Settings for screensnapping. And, puzzling as hell, screensnapping — out of the box — does not work:

v819mini no screenshots in the settings option, according to past experience, while holding down the power + volume down to screenshots. I practice after this operation is indeed accompanied by “click” sound, screen shot appears on the screen animation, but it says “Unable to save the screenshot, the storage device may be in use.” Why? I do not understand, the machine has root, and is not connected pc, estimates and temporarily identified as firmware bug it.

As he notes, it’s probably a firmware bug. Yet how could Onda ship it without noticing it? And note that the first report — the pure astroturf one — never mentions any such problem!

He does not think it’s “remarkable” in a complimentary sense, like the first report.

What happened next is a comparison of horror, shocking thing! Up to six months ago, I remember I used momo19hd (A31 Quad retina) ran [AnTuTu] also 12000 multisection it, this time using Onda v819mini suddenly ran out of the more than 20,000 points, but also very relaxed look. Start not believe tried several times, all the scores. Ranked third in the popular models! This in the end is God horse situation ah? This should be proud of than rk3188 10,008 even higher one.

What happened next was shocking. Six months ago I used a Momo 19HD tablet with the Allwinner A31 CPU. Its AnTuTu score was in the 12,000-range. Suddenly, the Onda V819 Mini has an AntuTu score in the 20,000-range. I couldn’t believe that, so I ran the test several times and got similar results. It’s now ranked third among popular devices. This is the work of Allwinner? It now scores higher than the Rockchip 3188.

But even he isn’t buying it, later noting that the main difference between the A31 and A31s is reduced power consumption and he calls that AnTuTu score “weird.”

This report concludes with some problems connecting to his PC, a Windows 7 system. But then it mysteriously works when he tries a second computer, running Windows XP. If I’m understanding the text correctly, he also rooted the V819 and tried to install the 3DMark benchmarking app — but it failed to install (other apps did). He wondered if these problems are another firmware issue. If so, that’s two huge firmware errors by Onda.

There’s a video at the forum post, which I won’t embed here. It basically demonstrates the touch sensitivity of the V819 Mini.

There’s more information in the post but it’s too ambiguous via Google Translate to recount here. Those who can read the original Chinese text can add anything important in Comments.

It’s going to be very interesting to see the upcoming explosion when buyers of the Onda V819 Mini discover that the improved AnTuTu score does not mean improved performance. Most Chinese tablet makers are already held in low regard by purchasers in China. This new bamboozling is just going to make it all worse for them.

It’s very telling that Allwinner never replied to my inquiry about the A31s improved AnTuTu score.