He was more than a writer.

He was an iconoclast, an explorer, a thinker, a questioner.

But above all else, he was a liberator.

Sleeping in a tent in public parks in England, he wrote by hand on paper a book that astonished the world, made his name, and perhaps saved the lives of millions and changed the course of world history. 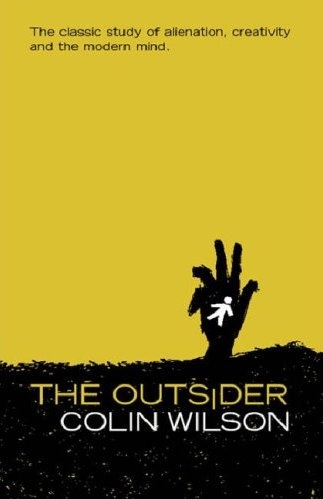 Of all the available covers online, I chose that one because that’s exactly how I felt when a friend loaned me his copy to read.

There are no words to explain the sense of liberation that book gave me. Those who have read it and were also as profoundly affected by it as I was know exactly what I mean.

People who don’t need the book, who aren’t in the book, aren’t affected by it at all.

So yes, in fact reading that book is actually a test of who you are.

Lives should never be compared, but I must. While Nelson Mandela’s work was visible to all, what Colin Wilson wrought was even larger — because it was invisible. It’s my belief — and probably mine alone — that had Wilson not written The Outsider, Mandela would not have had his ultimate victory. Wilson’s work set free the malcontents.

I am one set free by him.

Two of several excerpts from The Outsider I carry around and refer to from time to time:

[The Outsider’s] main concern is still the fact that his surroundings seem incapable of satisfying his desires. He is afraid that the world was not created to meet the demands of the human spirit. He is troubled and frustrated today, and he is afraid he may die troubled and frustrated, with nothing but a series of only partly satisfying experiences to give him incentive to get out of bed in the morning.

And from Twenty Years After, especially true:

This, it seemed to me, is the basic difference between human beings. Some are perfectly satisfied with what they have; they eat, drink, impregnate their wives, and take life as it comes. Others can never forget that they are being cheated; that life tempts them to struggle by offering them the essence of sex, of beauty, of success; and that she always seems to pay in counterfeit money.

And, these days especially, just the essence — the simulacrum — of freedom.

And from his novel, Philosopher’s Stone:

I developed remarkable powers as an algorist — a lowly branch of mathematics concerned with devising methods for solving problems — because of a completely new ability to see, for example, how certain variables could be replaced by the functions of other variables. But I was also aware that this was all a game, that to be good at mathematics is not very different from knowing the Greek dramatists by heart, or speaking fifteen languages. The real problems of human beings are so unrelated to these abstractions. The trouble with most people is an obsessive desire for security. They want domestic security and sexual security and financial security, and they waste their lives pursuing these until one day they realise that death negates all security, and they might as well have saved themselves trouble from the beginning. No wonder most philosophy and art has been so pessimistic. It is statistically true that 999,999 people out of every million waste their lives so completely that they might as well have saved themselves the effort of being born.

And this is perhaps the most difficult thing to explain in the language of everyday consciousness; it was a realisation that had been growing in me over the past few days. Everyone knows what it is to feel ‘accident prone’ — to feel tired and depressed, and to somehow know that things will go wrong. And everyone has experienced — at some time — the reverse of this: the feeling of inner-pressure and rightness. You could be driving ninety miles an hour, and somehow know that you wouldn’t have an accident. This feeling is not an illusion, born of over-confidence. Our subconscious roots spread farther into the soil of reality than we realise, and in times of unity-of-mind, they control things. This is not as strange as it sounds. I control my body, although it is basically a piece of alien matter. What is more, I control it without knowing how; all I know is that I can make it run and jump and walk. And in moments of intensity, the same will that controls my body extends beyond it, to material things. We apprehend something of the reality of the outer universe, and draw strength from that reality.

And Wilson’s novel, Ritual in the Dark, predates themes explored by J.G. Ballard, about how the more things are forced to be organized, the more people begin to unravel in violent ways.

In many areas, with many themes, Wilson was there first. And even when he wasn’t, his own contribution was something new.

The depth of his understanding of human beings and the reality we’re encased in is often underestimated or ignored due to his undramatic writing style. It’s as if he was engaging his readers with an ongoing test, “Let’s see how keen you really are. See if you can find what I mean. It’s meant only for people like us.”

For those who puzzle over the seeming unconnectedness of his wide-ranging books, I imagine Wilson, should he have been bothered to explain them at all, would have said, “This is what a curious mind does.”

Doing this post, I came across this quote of his that made a tear involuntarily drop from my eye:

The mark of greatness is always intuition, not logic

In one sentence he summarized what I’ve been blindly arguing — and failing at — with others.

If you haven’t read The Outsider, do so. If you’re not in it, it will be nothing more than a curious document that you probably won’t even finish.

But if you are in it, it will bestow upon you the sense of being that you’ve been blindly grasping for. It will save your goddammed life.

An outsider even to his death, The Outsider itself is available only as a printed book in this eBook age.