I don’t know why I sometimes look at Archos. I must be diseased. Trying to figure out that company and its confusing array of products invites madness.

Nevertheless, they’ll be at CES next month and will probably again display a bunch of tablets that will never appear — or appear too damned late for anyone to care.

One such tablet has a designation of “79” at the FCC.

According to the FCC filing, there is no Chinese source for this tablet (unlike a prior one), and the label says:

Designed by Archos in France&USA Assembled in China Model AC79PL

I believe this is the new Archos 79 Xenon. 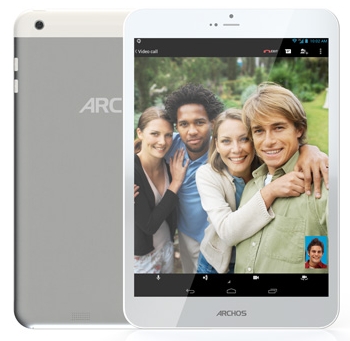 Given that Archos offers Cobalt, Titanium, Platinum, and Xenon, will they stop at offering an iPad Mini clone just in their Xenon line? I doubt it.

Maybe next month will unveil a Platinum iPad Mini clone with a Rockchip 3188 CPU. Why would that even matter? Look at the render above: That’s a plastic band at the top for the radios. This is an improvement over past Archos 8-inch tablets that suffered from weak WiFi due to an all-aluminum back.

Given the reach of Archos — which, admittedly, is very spotty — people still interested in an Android-based iPad Mini clone will have an alternative over ordering one direct from China.

Unless Apple winds up blocking it — as they did with the Samsung Galaxy 7.7 — on the grounds of “trade dress.”