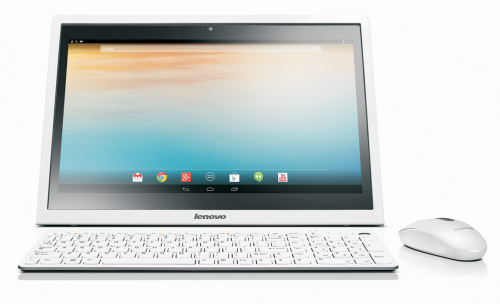 At the time of this post, there’s no press release I can find from Lenovo, so: Lenovo announces new consumer desktop PCs at CES, including an Android all-in-one

Lenovo’s N308 is an all-in-one PC based on an unnannouced (as of January 3. 2013) Nvidia’s quad-core Tegra processor, which Lenovo described as “higher than” Nvidia’s Tegra 4. It runs Android Jelly Bean 4.2. The computer includes a 19.5-inch TN (twisted nematic) touchscreen with resolution of 1600 by 900 pixels and two touch points; 2GB of DDR3/1600 memory; a 10/100 ethernet port; and a 500GB, 5400 rpm hard drive. The luggable enclosure is 1.3 inches thick, weighs 10.4 pounds, and can run on battery power for up to three hours. The stand adjusts to any angle, including completely flat.

The N308 comes with a wireless keyboard and mouse, but it also has two USB 2.0 ports and a 6-in-1 card reader. Network connectivity is in the form of an integrated dual-band 802.11b/g/n Wi-Fi adapter, Bluetooth 4.0, and hard-wired ethernet. The enclosure has built-in stereo speakers, mic and headphone jacks, and a 720p webcam. Prices for the N308 will start at $450 when the machine ships in February.

END_OF_DOCUMENT_TOKEN_TO_BE_REPLACED

Just announced via Twitter moments ago is a new Ultrabook and tablet. The tablet is interesting.

This seems to address many of the objections people had with the Miix2 tablet. I’m sure there will be many YouTube videos from CES of this.