You can thank the Hungarians at tech2.hu for getting this!

While everyone else seems to have ignored the Rockchip booth at CES, they went there and came across the new iFive Mini 3 with Retina-class screen! 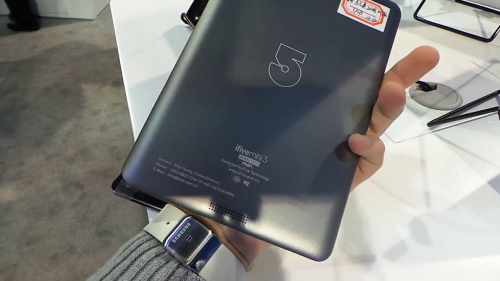 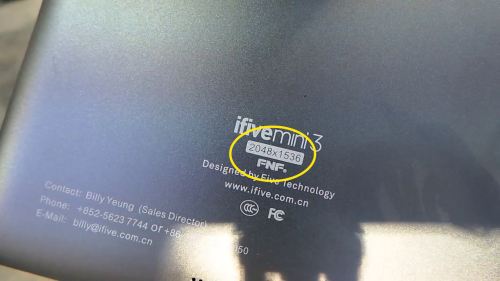 Nothing at the right side or bottom:

As will be seen in the video — it was too quick to screensnap clearly — nothing on the left side either.

Everything is at the top:

I’m not sure if that’s a reset or mic hole; then, 3.5mm headphone jack, micro USB (which is also used for charging), microSD slot, and Power button. If you didn’t notice: There’s no HDMI-out port or any Volume buttons.

Although notice it’s running Jelly Bean, not KitKat. So this is a prototype of some kind. We can only hope the version that goes on sale has Volume buttons but I won’t expect an HDMI-out port.

Third proof this is a Retina-class screen, contrasting its screen …

… to the original Mini 3 nearby:

This may be hard to discern in stills but it’s evident in the video (although your own view might vary depending on your screen at home).

… and then at maximum brightness: 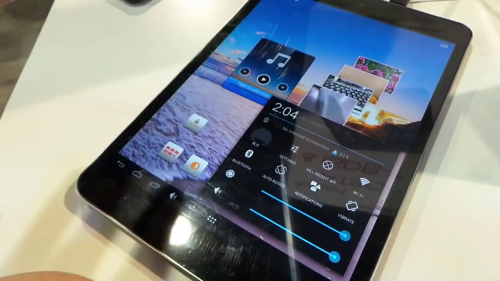 Unfortunately, they didn’t go into Settings to show Storage. I would have liked to have seen if this has 2GBs of RAM. But it must. It’d be suicidal for any tablet maker to offer a tablet with a Retina-class screen that has just 1GB of RAM. However, there’s the bad example of HP releasing the Slate 8 Pro with a 1600 x 1200 screen and a stingy 1GB of memory. We can only hope iFive does not imitate them!

I have to say that this looks very, very good. No one has ever complained about the build quality of the original iFive Mini 3. And as far as I can recall — I’ll double-check in the days ahead — despite its all-metal back, there were no problems with the WiFi signal. (I’ll also have to check past reviews for Bluetooth being included.)

The thing about iFive, however, is that even today the original Mini 3 has a higher price than other iPad Mini clones. When I peeked just yesterday, it was US$230. This Retina-class version will likely have an even higher price.

But I have to say this looks more appealing to me than the HP Slate 8 Pro. If I were to risk ordering something from China, I’d be more willing to bet on iFive. The only reason I shunned the original Mini 3 was its inadequate 1GB of RAM. Otherwise, it looked good.

As usual, disclaimers: Will it have 2GBs of RAM? Will the RAM throughput be sufficient? Will it have Bluetooth? Will the screen be full 24-bit color? Will Android be stable on the new 3288 CPU? Will it do Miracast? If Google does a massive change to Android, is there enough Flash storage for it to be installed?