I’m stunned at the speed at which this tablet seems to be coming to market.

Beginning January 20th, it will go on pre-sale at a discounted local price of 899, with a regular market price of 1299 [Google Translate] at Taobao (Tmall).

As if the price wasn’t stunning by itself, there’s more about the iFive Mini 3’s specs. And they all look damn good.

First, it’s thinner and lighter than the Retina iPad Mini:

Or so they say. I won’t kid myself on this point. When actual buyers get their tablets, they too often find that the weight and thickness claims were fraudulent.

Five Technology has already been caught out shipping their Retina-class 9.7-inch tablet, the 3, with bezels quite larger than the renders they pimp [Google Translate]:

However, here also needs to be noted that, in fact, the body is not as narrow border propaganda on the map, but compared to the previous generation narrower nothing, do not be misled by the official propaganda figure oh.

Another company that’s been caught at this is Ramos, with the K1 having significantly wider bezels than its renders.

So I won’t be surprised if someone with a micrometer and scale shows these thickness and weight claims to be somewhat exaggerated.

For more information about SanDisk’s iNAND Extreme, see their page.

That should help a lot with loading big games — and opening massive Google Books PDFs. I can’t find a comparison with the storage speed for the Retina iPad Mini, so this has to stand on its own. 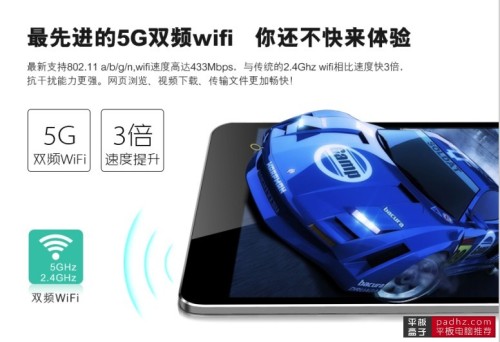 So called “WiFi 5G” should alleviate most concerns about the all-metal back, I think. There should be an improvement over the way the original non-Retina Mini 3 handled WiFi (which wasn’t too bad, and better than the Chuwi V88, considering its all-metal back).

All of the above illustrations come from the post linked to at the start. Five Technology, at post time, still isn’t listing this at their own site.

Nevertheless, those illustrations should be considered official from Five Technology.

Which means there will be no Volume buttons and no HDMI-out port.

Well, I can live with that. Screensnaps can be done using an optional software button available in Settings. And I really hate wires, so using Miracast would be fine with me.

Five Technology seems to be making up for the time they lost getting the original non-Retina Mini 3 to market. They were too late then.

But now the question becomes, will they be too early? I wonder how many firmware updates Rockchip and iFive will have to push out to address stability concerns because of a hasty release.

We also still don’t know if it will have 2GBs of RAM.

Finally, the pre-sale. There’s no idea how long a wait it will be until delivery. No official release date has been given. While pre-sale is sometimes an indication of imminent release, this time the post notes a “relatively long delivery period” — with perhaps an additional thirty day wait after official release date. I wouldn’t expect this to be earlier than April. I’d be shocked if it came out and shipped in March.