But that applies only to the press, not buyers!

Someone posted a YouTube video with a lightweight demonstration of it. No AnTuTu score, though. All images from the 720p video; click to enlarge.

Oops! Never let your banking info into a demonstration video: 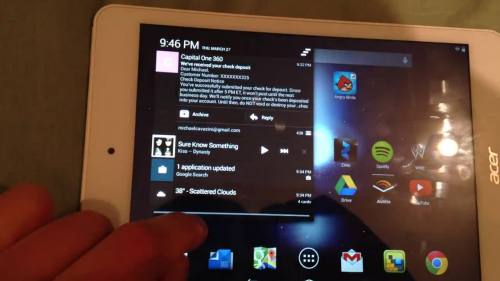 Google Plus insinuates itself into the device by using your Profile image:

And this could be the cause of many returns by the average Joe:

He tried to play live video via the WWE app. And got that blank screen. I left a Comment telling him why. First, Flash — which is likely what WWE is still using — is not available for that version of Android. Second, you can get the Intel CPU to use Flash only by rooting (well, maybe via Dolphin browser too — but he wants it in that WWE app).

Same-day update: Now we have a mystery. The owner of the tablet says that WWE uses HTML 5 video. So what would account for the app not working on the A1-830? Anyone have any ideas? As seen in the video, YouTube videos play fine.