That’s the ambition of a company named Emdoor, one of those Chinese companies that suddenly pop up and make noise without ever being heard of previously [Google Translate].

Google Translate is always very sketchy when it comes to numbers, so it sounds as if Emdoor is boasting they plan to sell one-hundred million tablets. I think the correct translation might be one million — which is pretty ambitious anyway for a company I’d never heard of until now.

Here’s the slide boasting they’ll release a tablet in the third quarter of this year that will sell for US$60: 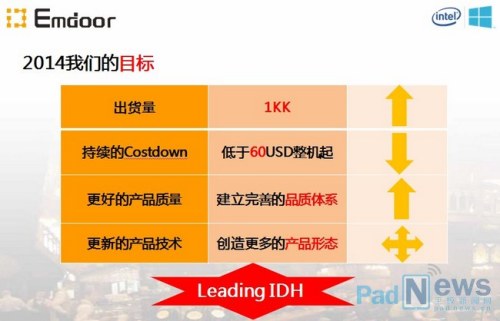 A tablet with a seven-inch screen(!) and a quad-core Bay Trail-T CR V2 CPU of as yet unknown frequency. RAM, storage, and other things yet to be determined. This will likely be one of those “1-16” tablets that have been in the news recently as part of Microsoft’s plan to somehow remain even marginally relevant — 1 GB of RAM and 16GBs of storage. At seven inches, I expect the screen will be 1024 x 600 — which is what many Android “call tablets” currently have.

Emdoor is also planning to release some 10-inch and 8-inch Windows tablets.

The third quarter is still a way off. Many things can change between now and then so perhaps a Windows tablet for US$60 will be surprisingly better than today’s speculative … um … specs would indicate.

Even at US$60, I can’t see myself buying one. Because it’s Windows.

As I’ve stated before, I’ve had the opportunity to really use Windows 8.x recently (as late as yesterday, too) and it’s a horror. Nothing about it makes any damn sense. I don’t think my reaction to it is any different from that of most people out there.

So to think that somehow a cheap tablet will equal widespread appeal for an OS that is frustrating to use is just delusional. And let’s not forget that this frustration will be compounded by trying to navigate a desktop UI clearly designed for a mouse on a seven-inch touchscreen.

Maybe Microsoft has a Magic Rabbit they’ll pull out of their hat later this year that will somehow morph all of Windows into something worthwhile on a tablet. We’ll see. I’ll remain under the classification of “Doubter” until that time.

Intel clearly has a future in tablets, having grabbed many Chinese partners as well as getting their chips into global branded tablets, like the Acer Iconia A1-830.

Microsoft must still fight for its life.