This is what many people running Google Chrome browser with Windows XP are getting when trying to connect to Twitter: 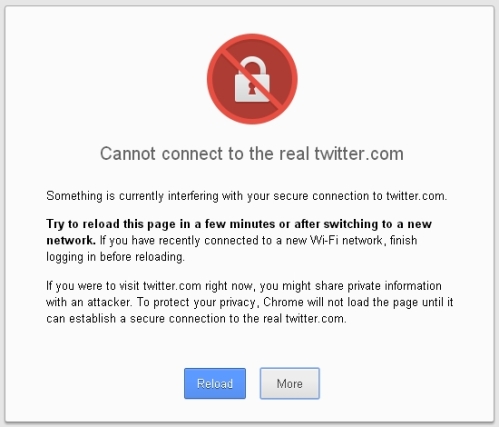 There’s a “solution” going around to go to Settings, Show Advanced Settings, and then to check this:

I tried that. It didn’t work.

Someone also suggested checking the Date and Time on the PC to see if it’s correct. Mine is, so that’s not it.

According to Google, the problem is that the new SSL Certificate from Twitter cannot be handled by Windows XP with Service Packs 1 or 2:

It looks like twitter.com’s SSL certificate was updated recently, and is valid from April 7, 2014 to May 9, 2016. If you are getting a certificate error for some websites only and you’re running Windows XP, then you most likely don’t have Service Pack 3.

It also looks like twitter.com is using a SHA-256 signed certificate, but SHA-256 wasn’t supported in XP until SP3. See http://support.microsoft.com/kb/322389

If you cannot load any HTTPS websites at all, then (1) ensure your computer’s year/date/time is correct, (2) if you have Kaspersky or ESET, disable “SSL scanning”, (3) if you are using Cisco ScanSafe, Cisco are working to fix it.

Well, I can’t load SP3 on my XP box. I tried it once and it slowed things to a crawl.

I can, however — at least so far! — get into Twitter using Firefox. But perhaps that might go away too when Firefox updates. Or maybe I’m stuck using the old and security-bleeding certificate. I don’t know.

It seems to me that people are going to have to get rid of Windows XP whether they want to or not.

This is why I sometimes rage against the tech world. This shouldn’t happen. Given the economic crisis that’s been ongoing since 2008, there are millions of people out there still running Windows XP because they have no other financial choice. Cutting them off from services they require is just cruel, if not actually discriminatory. Some kind of accommodation must made for them.

If there are further developments about this, I will update the post. In the meantime — at the time of this post — all of you stuck with this problem have a lot of company. See this Twitter Search.

Those of you with friends who can still get on Twitter, have them voice your misery to @Twitter, @Support, @jack (Jack Dorsey, who leads Twitter), and @GoogleChrome. Without a sense of how large this problem is, it won’t be addressed.