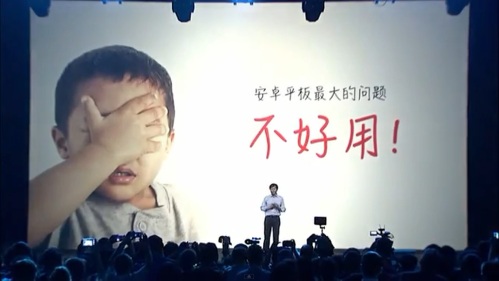 Someone managed to rip from Youku the Xiaomi presentation that introduces their 4K TV, soundbar, and MiPad.

I don’t know if stitching it all together (the ripping site I used split it into several parts, so I abandoned my own effort) caused some glitches, but it seems the cuts are rough and the sound goes a bit out of sync.

Still, it’s interesting to watch — and a mini-crash course in spoken Chinese.

The MiPad introduction begins at 30 minutes in but I recommend watching the entire video, which is after the break.

Next-day update: I’ve swapped out the video I had embedded here with a version from XiaomiHK.

If you watched it did you notice the huge difference between it and Apple introductions?

Everything was on slides! No actual products were shown or demonstrated on stage.