Some images from each:

Not a SIM card slot —

— that’s for the microSD card. That’s going to be a PITA if you want to switch cards. But the MiPad can use 128GB cards so this likely won’t be a problem for most people — they’ll have enough storage.

An unfortunate sticker mars the back:

Other pictures show it can be removed. But still.

And now just two images from the disassembly: 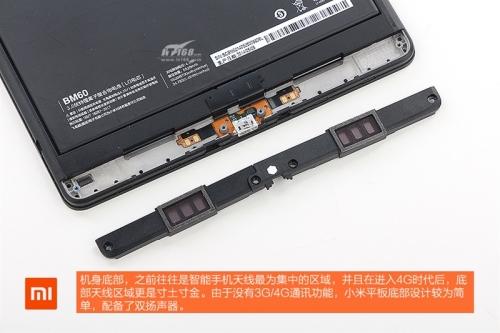 It’s evident from the disassembly pictures that the Xiaomi MiPad is the best designed and assembled tablet from a new Chinese brand. Its build is superior to that of the Chinese-made Acer Iconia A1-830. Do you get the implications of that? Xiaomi’s MiPad surpasses the mechanical design of a global brand-name.

I’d have as much confidence buying the Xiaomi MiPad as I would in buying an Apple iPad. This isn’t something I can say of other domestic Chinese brands.