See, this is why I will never be the first to buy any hardware at all: The first batch is never the final product.

In a Weibo communique today, Onda announced the availability of a BIOS update for the V975w, their 64-bit Bay Trail-T Z3735D-based Windows tablet:

# # [Onda Win8 tablet firmware upgrade # # Onda V975w quad-core version of the latest 0725 BIOS update: further optimize CPU utilization, enhance the stability of the system. Upgrade Considerations: Make sure the battery is more than 40%; update process, please do not do any other operation; while updating bios, touch or mouse is temporarily unavailable, is a normal phenomenon. Download → http://t.cn/RPqEqv8

The new BIOS will optimize CPU use (probably get rid of the spurious CPU use others have seen when no programs are running) and might get rid of all the crashes several people have noted (see this post).

IMPORTANT: If you’ve adjusted the graphics memory as detailed in this post, restore it to its original 512M value first!

Although Onda is saying the battery should be at least 40%, anyone with sense will make sure the battery is fully charged — 100% — before proceeding. Because Things Can Happen. Nothing else should be done with the tablet while the BIOS is being updated and mouse/touch functionality will temporarily be disabled (a reboot upon completion might be required).

This is the download page (which Google Translate cannot do): 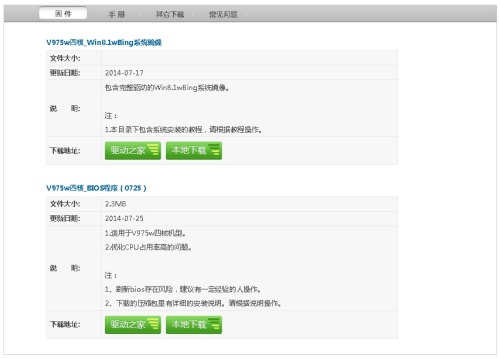 If it’s not obvious, it’s the second download that’s the BIOS update. And the instructions it contains will be in Chinese. I’m not downloading this to peek, so Onda V975w owners are on their own. Anyone who applies the update should leave a Comment with their experiences and let everyone know if the tablet is more stable.

Same-day update: At the Onda forum, the BIOS update is announced and these are the posted instructions [Google English]:

1 The following extract from the archive folder on the desktop or tablet PC C root directory.

2 Double-click the folder under the “double-click the installation. Cmd” document, the system automatically updates the bios, the machine will restart after the completion, BIOS update is complete.

That seems a bit vague. It’s unclear if the tablet should be connected to a desktop/notebook PC via USB or if the update should be placed on a microSD card. Perhaps the instructions (which will be in Chinese) contained in the download have illustrations.

As for owners of the V975i who have (miraculously!) managed to flash their firmware from Android to Windows, this BIOS update can be used by them too.

Second same-day update: In the Onda forum, someone is reporting that after applying the BIOS update, watching HD video ramps up the CPU to max and also gobbles too much RAM [Google Translate]. Since no specific type of HD video file was mentioned, it’s unknown if this applies to all HD video (720p/1080p) and filetypes (AVI, MP4, MKV, etc). It’s also unknown which specific video playback software was being used, but I include this update out of caution. Let’s see if there are further reports like this. In short, welcome to the Windows Nightmare where diagnosing problems is a trip to Hell.

In a second Weibo communique today, Onda reminds people of the steps to activate Windows (which is also covered in their FAQ): 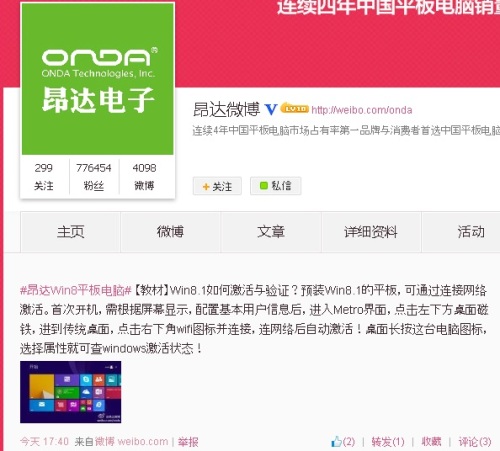 # # [Onda Win8 tablet textbook] Win8.1 how to activate and validate? Preloaded Win8.1 flat, can be activated by connecting the network. First boot, to be based on-screen display, the basic user configuration information, enter the Metro interface, click on the bottom left of the desktop magnet into the traditional desktop, click on the bottom right corner of the icon and wifi connection, even automatically activate the network! Press this computer Desktop icon, select Properties windows can check activation status!

This is basically duplicated from their Windows FAQ [Google Translate].

If that’s still not clear:

1) When first booting the tablet, you’ll be asked to enter owner information (this might require setting up a OneDrive account too)

2) After that, you’ll be in the Metro/Modern interface

4) In Desktop, press the icon for WiFi at the lower right corner to make sure WiFi is connected or to activate WiFi

It’s encouraging to see Onda push out an update like this so soon. I hope all of the complaints I’ve seen will disappear after this. Perhaps this tablet will be worth buying after all.