Oddly, Five announced it at the 5Fans forum and not on Weibo [Google Translate].

Although Tmall lists it at 1299 (temporarily), the actual price will be 1099, as seen in this graphic where Five compares it to the Xiaomi MiPad: 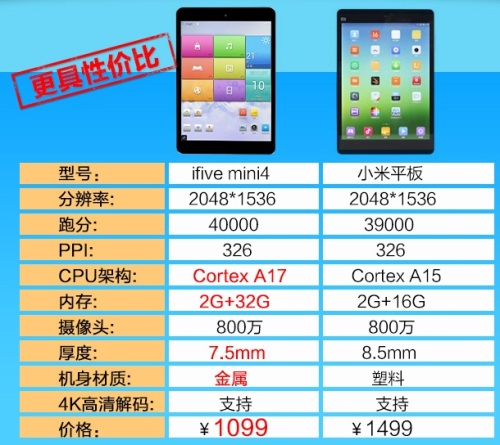 At one time — it now seems like ages ago — I was thrilled at the prospect of this tablet. But this graphic — and other tablets released in the long wait for this one — dims that enthusiasm:

The back is again WiFi-strangling all-metal and there are no Volume buttons. The lack of Volume buttons make rooting problematic. And I think people will want to root it — Five is slathering its dismal iFive Skin over it. That indicates to me there won’t be Rockchip’s MultiWindow Android 2.0 inside.

At least Five has boosted the battery — it’ll be 5,600mAh. But I still think it won’t get more than four hours of constant use (even with Five already having dialed-back on maximum screen brightness, as they usually do).