iPad Mini Clone At Staples For US$80

Thanks to @ebooknoir for the tip. 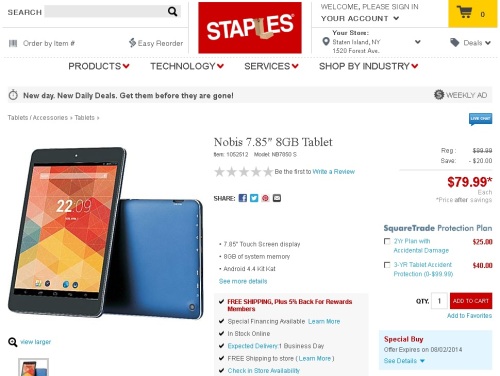 In NYC, Staples has a sketchy record when it comes to things actually being “in stock” at a store. Being in stock doesn’t mean there’s a demo model out to fondle, only that there’s at least one box you can pay for and take away. So although their site says there are three Staples I could go to for it, I’ve decided not to. The Allwinner A31s has an AnTuTu score in the 12,000-range. Besides, I doubt Staples would have any demo model connected to WiFi (they rarely do) so aside from pawing at it, I wouldn’t be able to do any useful testing.

A light Googling revealed three threads people might want to read before sinking eighty bucks: XDA developers, Android Central, and Phandroid. None of them are about this specific model but indicate to me what any buyer would be stepping into.

Oh, and as for that name, “Nobis”? I’m sure it’s an anagram. Either for “Bison” or more likely for “iSnob.”