Over at the IMP3Net forum, user 2222 — who revealed Rockchip cheating at AnTuTu — has tested several large games on the iFive Mini 4 and the RAM throughput defeats them [Google Translate].

I’ve copied full-size images since the test data would be too small to see reduced; click to enlarge. There are more images at the original post.

After entering the game instead of the normal display, the next highest number of frames is not very satisfactory effects, although able to play, but do not feel smooth. Because with the estimated bandwidth bottlenecks caused LPDDR2

And going with LPDDR2 is a weak point.

Modern Warfare 5, too, about the average 20 nor smooth

Need for Speed ​​17 effects range, with an average of about 33, and smooth

And now I think we can believe the WiFi is actually improved over past Mini models. This is the third report to say so:

But this time the wifi strength and stability has been greatly improved over mini3, broken during the test did not encounter problems such basic

A screen brightness test is done and again the Mini 4’s screen is praised. And here’s a comparison against the MiPad (left), which shows warmer colors: 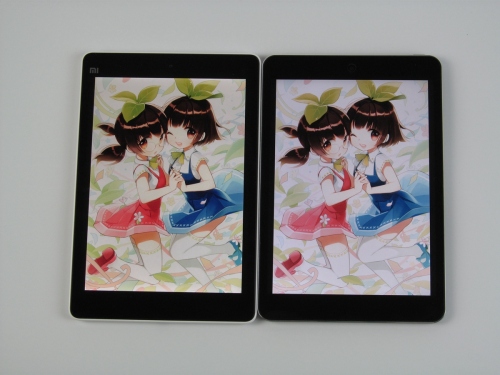 I’m not sure that comparison can be used at all. Both Xiaomi and Five are using two suppliers for their screens and this could be two different screen makers being compared. If the same screen maker was being compared, they’d be exactly the same.

Up until I read this, I thought the iFive Mini 4 was a competitor to the Xiaomi MiPad. But it’s not. The MiPad absolutely crushes it.

Personally, I need to know how the LPDDR2 would affect Google Books PDF reading.