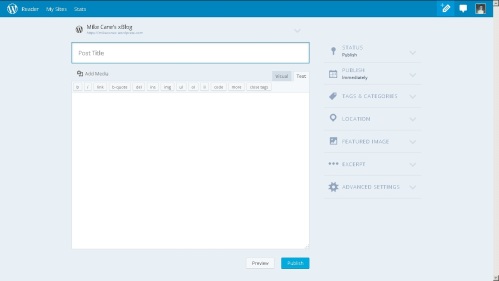 1) They’ve taken away the Proofread button. That button has saved my ass from embarrassment more than once.

3) I can no longer grab links from past posts. This is was a critical new feature I used all the time.

4) Once a Draft is saved, HTML code is now vomited all over the text, making it very difficult to manually proofread.

5) Updating a Draft versus Publishing a post is confusing as hell. There’s no Save Draft button, just a stupid Preview button.

Why the hell didn’t they just give us back the UI we had before, with the non-expanding textarea? Why change the entire damn thing and make it less useful?

Until WordPress fixes all of this shit, you can expect posting to be slower and probably filled with typos I can’t catch without machine assistance.

Someone over there really needs a beating.

1) They took away the upper left corner banner link I would click to jump to my blog.

2) The list of blog Categories is now like four times as long because they inserted stupid space between each category.

3) I still can’t figure out WTF is up with Draft versus Publish. Must I always go to Status to manually tell it to Publish?! Why don’t you just give us a damn Publish button again?!

And there was a typo in this post. Give me back the fucking Proofread button, you pack of Prozaced-up knobs! Do any of you use your own damn service?

Why the hell do my Previously Here links now have blank lines between them? Are you people nuts?!!!?

There’s no longer a way to make a post a Sticky!

I can’t work like this. I’m suspending all new posts until WordPress fixes all this shit.

WordPress Gets A New Post-Publish Screen