In a Weibo communique, iLevon reveals some versions of MIUI 6 for some Xiaomi phones will be based on Android 4.1, not 4.4:

Message 2 meters late at night to say something right: miui m 2 of 6 already have, based on Android 4.4, but the effect is far from ideal, can not come up with. For m 2 development team, has started based on Android 4.1 miui 6 adaptation plan. 4.1 based on workload, the difficulty is also large, the user may not understand. Every time I see someone criticize miui engineer for them to feel very frustrated, so I try not to say that the message two meters, we understand.

The pressure is clearly on, because he then cracks a bit:

Some people come to me swear! Funny it, go to the forum to criticize Quguan Bo engineer to look, where you can tucao but do not show the lower limit, okay? So late reply you what I figure ah, go to sleep until two share point information is my fault? I want to share information but also to figure out you know some specific cases, not discouraged barrels, the official did not clear the message mentions two before, and do not like to take off, I do not care what number of fans!

People bug him. He just wants to keep people in the loop.

On microblogging Thank you for your support, not to respond to, thank you! Autumn Assembly began on Android 4.4 for forum enthusiasts do m miui 2 / 2s of six, but certainly not as good as the official stable, you can focus on, the official version miui 6 will still be based on 4.1, so everyone would have a choice, the other : autumn big millet employees, not private!

So there will be two versions of MIUI 6? One based on Android 4.1 for the general public, and one based on 4.4 for people in the forum who are more technically adept? That’s what it sounds like via Google Translate.

As for MIUI 6, it might have some features that improve the user experience in comparison to 5, but as an outsider I just wasn’t impressed by what I saw. I hate Flat Design and 6 is full of Flat, with anorexic icons and buttons.

Android was Flat out of incompetency — no one at Google understood design, so the Flat was basically enforced minimalism that was then turned into Design by Matias Duarte. That this has since metastasized into something that’s spread to even iOS I find distressing.

As I said on Twitter during the weekend, if those who worship the philosophy of Flat were in charge of painting, this would be the end of all painting: 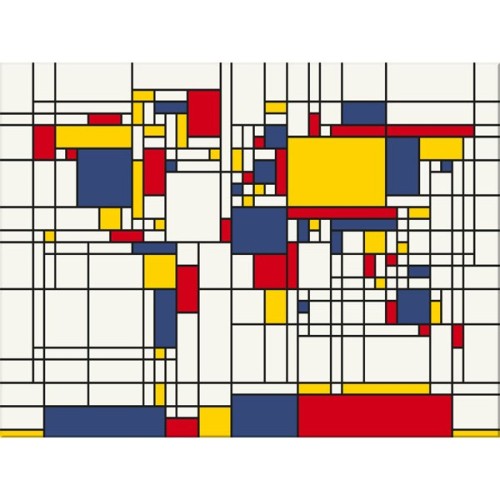 That’s a map of the world!

In fact, even comic books would look like that — because that’s the philosophy of Flat. (Heh, days after typing that, someone pointed me to this Doonesbury comic.)

Anyway, back to MIUI 6. The rumor that it would include split-screening was apparently wishful thinking. There’s no indication at all of split-screening in it — which means there’s nothing of the sort to look forward to on the MiPad with MIUI 6. A lost opportunity to frighten Samsung and to leap ahead of Apple.