I thought I did this test. But Search tells me no. So it’s a good thing I happened to do it today, unplanned.

I’m not sure which version of the Note 3 this is, quad-core Snapdragon or octa-core Exynos. Samsung likes to play Hide The Salami with the CPU. If one of them is U.S.-only, then that’s the one I used at Best Buy. 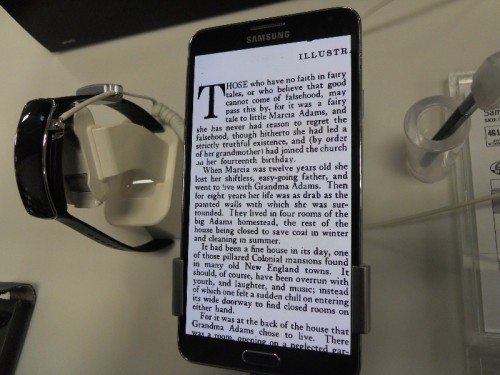 And that extra 0.2 inches makes a big difference with Google Books PDFs too.

A column from The American Magazine is big enough to read comfortably when pinched-zoomed. Even with the screen being “just” 1920 x 1080.

Despite the LG G having a quad-HD screen, there was no difference between it and the Note 3 in sharpness of the text. Perhaps this is a shortcoming of the Foxit Mobile PDF software. I don’t know. But I think there should be. Maybe it’s a limitation of the PDF itself?

Anyway, my experience was smoother than with the LG G3, as this video shows:

Paging is still sluggish, but not as bad as on the Samsung Galaxy Tab S 8.4 — probably because there’s fewer pixels to push around — and the overall feel is better than the LG G3.

Next month the Galaxy Note 4 will be in stores. I will test that too.