No phone with a 5.5-inch display is going to be particularly small or easy to manage in one hand, but even with that being the case the ZenFone 2 is quite large for its screen size. Having capacitive keys (which don’t light up, by the way) taking up room under the display isn’t helping any, but beyond that the entire build is a little on the bulky side. It’s just a sliver smaller than a Galaxy Note 4 despite having a smaller screen and no physical home button, and considering how thin the plastic is all around you’re not getting much in the way of sturdiness for the extra thickness.

END_OF_DOCUMENT_TOKEN_TO_BE_REPLACED

I came to the livestream — which I didn’t even know would happen! — late.

Asus was pimping the hell out of the camera, which puzzled me after seeing the mostly negative reviews of its camera on YouTube. 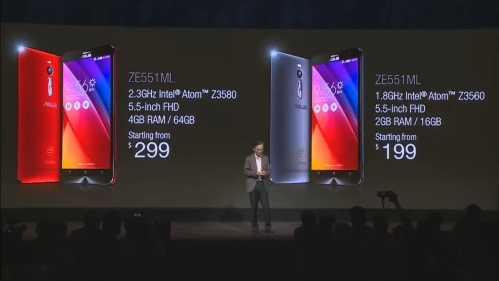 END_OF_DOCUMENT_TOKEN_TO_BE_REPLACED

Out of the $930 million judgment against Samsung, the appeals court ordered the court in San Jose to reconsider the $382 million portion awarded for trade dress dilution.

Trade dress is a legal term for a trademark on the way a product is packaged or presented. As part of its case, Apple had accused Samsung of diluting its brand and connection with customers by copying the look of its phones.

The appeals court said the features Apple sought to trademark were not eligible for this kind of legal protection because they relate to the functioning of the phone. To grant such protection would give Apple a monopoly on these features forever, the court said.

Someone at Apple must have realized that trade dress victory would be overturned. Otherwise they would have sued Acer to remove the A1-830 from Best Buy, as they had the Samsung Galaxy Tab 7.7 banned Europe.

Filed under Android, Apple: The Company

My website will present short stories, novellas and novel excerpts written by Hollywood insiders like myself. After 30 years as a journalist, I’m now going to expose the hard truths and gritty reality of showbiz through creative writing. In fiction, I can be more honest than just sticking to facts. The stories which I and others write won’t depict any actual Hollywood person or event. But they will marry artifice with verisimilitude into original content creation.

I don’t care if the site gets little traffic or The Powers That Be ever advertise. Instead, I’m setting up a TinyPass paywall and charging readers $1 for each post and paying writers from the proceeds once a month. I want to create a fiction forum not just for my own work but for all the creative writing talent which Hollywood attracts but rarely nurtures. I will run the website as well as write for it and market each fictional story to my 265,000+ Twitter followers.

Ouch. US$1/story paywall. To make that fly, Nikki will need a serial that hooks people like Mad Men and Breaking Bad did.

Due to #FuckCancer, I will not be able to attend after all.

Probably just as well. The camera, tested in a video after the break, is rather disappointing.

END_OF_DOCUMENT_TOKEN_TO_BE_REPLACED

CUBE To Do Remix OS Tablet

The link [use Chrome browser to translate].