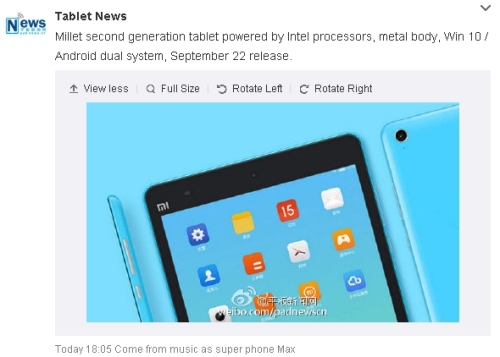 That’s an illustration, not the MiPad 2.

If it’s really in the TENAA database, a leak of that could happen anytime this weekend.

Dual-OS points to a widescreen tablet. And a huge defeat for Lei Jun’s vision of leading the way with Android tablets at 4:3 aspect ratio.

Let’s see whose dual-OS scheme they use. Or will Xiaomi have rolled their own?

It’s improbable that I’ll have any interest in this tablet.

I hope, however, this will finally be the China tablet that Steve “Chippy” Paine gets interested in and reviews. He once bought some Android tablets from China. So far, nothing for Windows or dual-OS. He is The Man when it comes to Windows tablets.