I received NGP yeserday. and I rooted NGP with Kingo Root for pc.

Not opening Nook, you can root easily.

1. open USB debugging on Development Options
2. connect to PC, and with Kingo Root for pc you can root.
taking almost 30 minutes, over 10 times rebooting is need.

Kingo Root can send sensitive info to its Chinese servers. If you use it, you need to remove it from your NGP ASAP. I would be very cautious about using a PC version. Try http://forum.xda-developers.com/show…php?p=61748798 method, used for another device, jnstead (without the part about downgrading Android firsy, of course).

Edit: When I checked out this method, it also requires your device to be online. No go for me. Proceed at your own risk, as always!

Chinese rooting methods tend to go beyond liberating a device. God only knows what he’s installed on his Nook now! Soon he’ll find his credit card information making purchases from some province in China.

Now, let’s get the other bad news out of the way too.

If, like me, you were hoping to use it as a Kindle, ewandeep reports (about all apps too):

I succeeded. However most of the applications crash or are not usable. For instance kindle crashes when I open a book.there is a version that works? Is there a good pdf reader? Thanks in advance.

Hmm mine seem to work no problem, here is where I got the kinda apk:
http://www.apkmirror.com/apk/amazon-…-apk-download/

It did crash so at first, so using Savior buttons I went to the open/running apps and swiped it away. after that opened it again an it worked no problem. Sync’ed with Amazon and got a book and opened it. (A little slow since the kindle app is probably meant for quad core table processors )

Hmm, indeed. None of the Amazon apps that I’ve tried works.

The oldest I have (and which works on all the other Nooks) behaves weird here: forgets credentials, shows text black on black after the first page.

I tried this apk too. It worked further than the others, but it’s still crashing on some books

And it took a while until I could register, it’s like the keys on the keyboard were pressing on themselves, randomly. Weird.

it uses too much resident memory.

Actually the Kindle brings down the whole Android at times (eg: reboot).

I believe the unreadable text is because the 3.2 version of Kindle that I have was changed so that it worked better on NST.

I couldn’t find any original one on the inet.

Does anyone have a 3.2.x version of Kindle that’s original ?

An original 3.2 does the same

nicvel later says he’s got a Kindle app working but:

Kindle version for Rooted NST, the Modaco version – The pages of the book where rendered over dark backgrounds. I think it was a problem related to the refreshing og the screen.

This is a bit frustrating.

Amazon shouldn’t care whether or not people are using a Nook. They make more money from Kindle book sales than one-time Kindle hardware sales (setting aside the ads they charge for!).

What I think is going on is that Amazon’s Kindle app engineers have become lax and expect powerful hardware for the app. They need to learn from the lesson of SmartQ Reader: Build it for low-end crap devices, that way it will work well on all.

In the meantime, the only solution might be to DRM-strip Kindle books and convert them to ePub to read in a different app. How to do that is not something I’ll go into. Pay the writer is why. There’s plenty via Google without me adding to it. Besides, someone could still find a way for everything to work. These are very early days.

On page 9 of the XDA Developers thread, talk begins about renaming/removing native Nook apps. I’m not even going to try to quote that. It’s above my head and I might screw it up.

On safer ground for me, people are beginning to compile a list of apps that work. That will eventually become a mater list, but for those doing this at home, here’s the in-progress contributions from:

Windsor1959 (who, not quoted here, also notes the Nook might lack hardware acceleration; no surprise):

I don’t know that reference to Renate’s app. Something somehow got by me.

dnastase (who, not quoted here, says the Nook lacks a swap file; no surprise):

I have run Mantano Reader Premium 5.2 for 4 days without much problems. On Epubs and reflowed PDFs there is an odd glitch, where left the diagonal half of the screen is displayed a pixel or two above the diagonal right half. The glitch is present in both landscape and portrait reading modes, and if the screen is forced to display two pages side by side, only the right page presents the glitch.

Did not work
Yahoo Mail 4.92 – Crashed when downloading attachments.
Kindle version for Rooted NST, the Modaco version – The pages of the book where rendered over dark backgrounds. I think it was a problem related to the refreshing og the screen.
Smart StatusBar (Kiumiu.ca)15a – Does not bring back or reveal any status bar

Meanwhile, over the The Digital Reader: Nook Glowlight Plus Review: If It Were Made By Anyone Other than B&N …

I wish the Glowlight Plus was running a Kobo firmware. That would combine the screen I like with software features I like, and it would allay concerns that the Plus might be turned off tomorrow.

This is a far nicer looking mid-range ereader than the Kobo Glo HD, which even though it was supplied from the same Chinese OEM (Netronix) looked and felt cheap compared to the Paperwhite or the Glowlight Plus. Combining the better aspects of the Glo HD and the Plus device would be the best of all worlds, but alas it’s just not going to happen.

On the other hand, if B&N were to turn it off, maybe the Library of Congress would finally allow people to legally jailbreak their damn eBook readers.

I don’t see how he can return it. If you cover eBooks, shouldn’t you keep it in order to report on software updates and the rooting scene?

Over at The eBook Reader: Kindle Paperwhite 3 Blazes Past Kindle Voyage — while it’s true the Nook Glowlight Plus backlight is bluish compared to the two higher-end Kindles, the Kindles themselves feel cheap. Leave it Amazon to charge a premium price yet still give people a shitty plastic tactile experience. No class.

And the other point of my seemingly swerving off-topic with that: Make an eInk-friendly version of the Kindle app, Amazon!

The Kindle can’t be, to coin a bad term, “tabletized” like the eInk Nook, and it’s not like Lab126 will ever see the light and do an Android-based version of the Kindle, so: Do it.

Over at the Barnes & Noble forum, how to move ePubs onto the Nook using Calibre:

Once the glowlight is connected to Calibre, click on the device icon, then click on configure to change the folder to nook/file.

Make that NOOK/My Files and you should be good to go.

Boldfaced emphasis in the original.

These two posts have been updated:

Is this it? Power Adapter for NOOK GlowLight and NOOK Simple Touch. That’s all I ever see in stores — and it’s labeled just for the Simple Touch. WTF. Is Barnes & Noble going to replace a Glowlight Plus that gets fried?

Finally, imagine my surprise when I was in Barnes & Noble yesterday and decided to check into XDA Developers on the Samsung Galaxy Tab S2 8.0 and saw this from Renate: 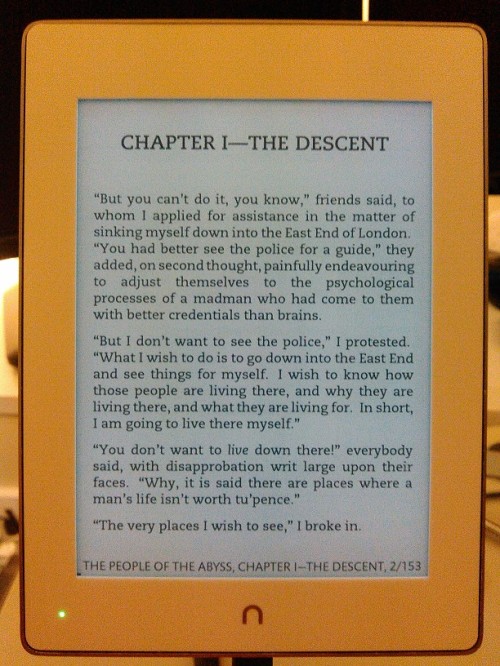 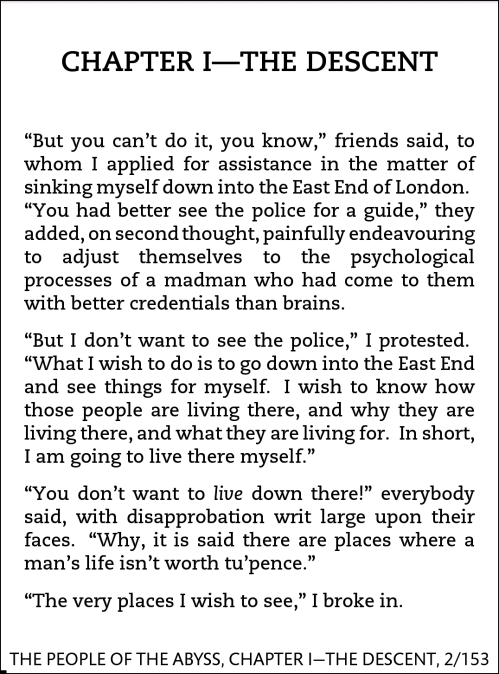 I don’t understand, what is it ?

Just showing off my reader app and a personal hello to someone who apparently likes Jack London.

If you’ve gotten this far into the post, then you already know there’s still:

2) No photos of a Nook with apps