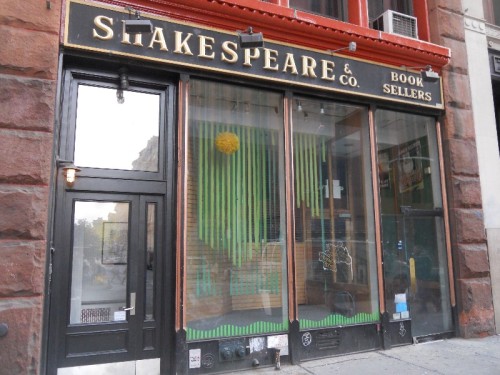 Another bookstore in Manhattan is dead.

END_OF_DOCUMENT_TOKEN_TO_BE_REPLACED

The 1920s Scheme To Create A National Bookstore Chain

Continuing my research into Napoleon Hill, I came across a remarkable thing in an issue of American Stationer and Office Outfitter:

The following prospects, printed on a page leaflet, has been sent out by the United Bookstores Co. of America:

An opportunity is presented to a limited number of persons interested in wider and more profitable book distribution to participate in a strictly business enterprise for this purpose by becoming members of a syndicate to promote the United Bookstores Company of America.

END_OF_DOCUMENT_TOKEN_TO_BE_REPLACED

The End For Borders 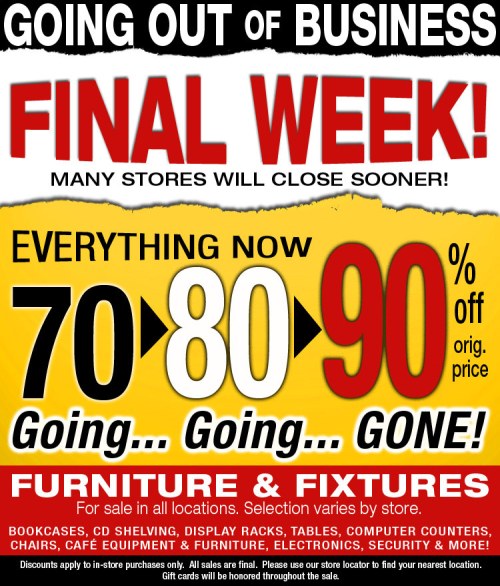 Bitter Pill Quote Of The Day

where is the government bailout for Borders? Surely it was "too big to fail".

I told all of you on Friday it would be liquidating.

Now do you believe me?

And Len Riggio of Barnes & Noble, you shouldn’t feel smug. There’s a bullet out there with your company’s name on it too: It’s called basic math.

Borders HQ has issued the order to all remaining stores for inventory to be taken.

Expect your local Borders to begin sprouting signs like that above.

If you have a Borders Gift Card, zero it out today!

The Communists of China recognize that Europe are their customers and it’d be bad for business for the Euro to collapse.

Meanwhile, print publishers have been all La-De-Dah and Drop Dead to Borders as it tries to prevent its own collapse.

Because, you know, there are just jillions of people out there ready to open new bookstores to take up that possible gaping hole in the market to sell an obsolete product.

That’d be so much fun for them too: Selling to a bunch of new tiny accounts on a piecemeal basis instead of one large account in bulk.

[Bradley] Graham and his wife recently purchased Politics and Prose in Washington, D.C., one of the nation’s premier independent bookstores. What was he thinking? “We’re not a dying breed,’’ Graham insists. “There are still enough of us who believe in books to invest small fortunes and the rest of their lives in this wonderful business.’’

Does he plan to drop dead in five years? Because I think his bookstore will be dead by then.

Now all I have to do is live five more years to see it.

Jillian Michaels book signing for her New York Times bestseller, UNLIMITED: How to Build an Exceptional Life, at Barnes & Noble at The Grove., originally uploaded by CrownPublishing.

Actually, I don’t know if it’s Crown that did this or the author, Jillian Michaels, but it’s under Crown’s Flickr account.

Apparently at a Barnes & Noble signing for her book, photos of Jillian with each reader were taken and then uploaded to Flickr.

This is a welcome break from all those damned emails for Rewards Members.

Now they need to inform people about Kobo handling eBooks. And they must arrange for Kobo Books Gift Cards.

Because no one will buy this until Borders reassures people that their eBook purchases and Gift Card balances will be absolutely safe.

In fact, that shouldn’t be a plain pimping letter. It should a letter from Edwards himself, explaining in plain language that Gift Card balances and eBooks will be safe, guaranteed, and not disappear. Lay it on freakin thick. And no damn corporate speak. Make it human.