Over the weekend, I listened to an MP3 conversion of a talk at Google by Christopher Bonanos.

He wrote Instant: The Story of Polaroid.

It’s difficult to imagine such a massive company hitting the rocks and sinking so quickly.

But consumer videotape was the rock that sunk Polaroid like a corporate Titanic.

END_OF_DOCUMENT_TOKEN_TO_BE_REPLACED

The horrors of Kindle Format X

The problem with Amazon’s Kindle platform has always been that it has been designed and maintained by people who, quite evidently, do not understand books. The device and its firmware has been designed by Lab126, a company that specializes in handheld devices, and the name, Lab126, could not be more fitting, because everything about the Kindle has felt like something put together by lab rats, from day one; people with no sense of the real-world application of their devices. I would not be surprised to hear that the engineers at Lab123 have never really read a book on a Kindle or tried to format one, for that matter.

They might notice it doesn’t look exactly like a “real” book and that some weird things happen with sub- or super- scripts or fractions, but otherwise they live with it for the sake of both convenience and because they’ve already sunk money into a damn device (be it a Kindle or iPad or anything else that will run the Kindle app).

Although, these days, eBooks look best from the iBookstore on an iPad. Although that contains horrors of its own too.

Jane Friedman on bringing books ‘back to life’

Oh, I was one of the skeptics. But I didn’t understand what her goal was.

What I’ve seen every damn year, though, is a sale at Amazon with titles that make me go, “I want that and that and that and oooh yes that one too” — and they all turn out to be eBooks from Friedman’s company, Open Road Integrated Media.

She wins. She rules.

Anyone who wants to do eBooks should study her company.

The Story Behind “The Martian”

I had no damn idea:

The story unfolded as a serial over the course of several years. At the request of fans, Weir repackaged it in an e-reader version. Some readers struggled with the downloading process, so Weir then put it on sale at Amazon via Kindle Direct Publishing, charging the required minimum of 99 cents per copy. More people downloaded it at that price than had ever downloaded it for free. They gave it positive reviews.

Not a single damn person in my bookish Twitterstream ever mentioned it to me.

And you would think Amazon would have pimped the shit out of it. They fell down on this job!

Waterstones is removing Kindles from stores

Waterstones is removing Amazon’s Kindle devices from many of it stores as sales “continue to be pitiful”.

Why is this any surprise?!

People have large phones to read on.

When — and if — they read at all something other than narcissistic IMing. 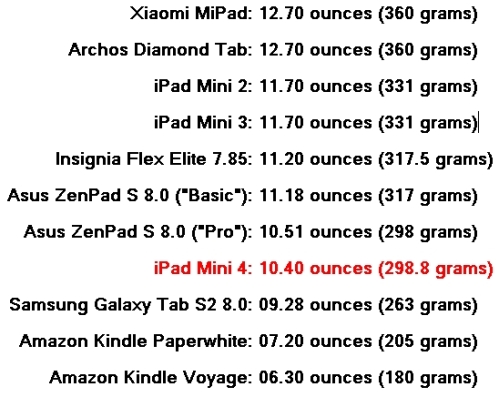 Samsung wins for the lightest tablet.

As for the iPad Mini 4 gram weight being higher than the Asus ZenPad S 8.0 “Pro,” chalk that up to Google conversion math. Apple lists 0.65 pounds, not ounces or grams, on their U.S. site.

That said, the iPad Mini 4 probably kicks the Samsung’s ass because it has the guts of the iPad Air 2, which is a supernaturally-powerful beast from the pit.

Same-day update: It turns out the new Mini 4 does not have the guts of the iPad Air 2. It’ll use the A8 CPU, not the A8x CPU of the Air 2. Which means I’ll have to go through an entire new round of Google Books PDF tests on the beast. Thanks for not making my life easier, Apple! 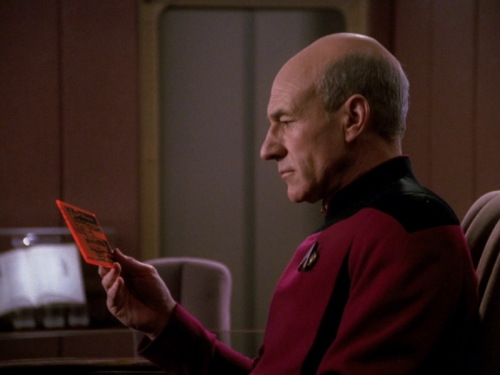 In my time holding the Samsung Galaxy Tab S2 Nook Edition at Barnes & Noble, I realized that I’d be holding one of these tablets for a lonnnng time while reading.

So I thought I’d investigate weight.

END_OF_DOCUMENT_TOKEN_TO_BE_REPLACED

Hound, Siri, Google, Cortana: The Road To Box & Her

Thanks to Dan Miller for pointing me to the video after the break.

END_OF_DOCUMENT_TOKEN_TO_BE_REPLACED

A Public Service Announcement From Xiaomi

END_OF_DOCUMENT_TOKEN_TO_BE_REPLACED

Meerkat is dying – and it’s taking U.S. tech journalism with it

How is it possible that people who have witnessed the lightning fast collapses of hype vehicles like Secret and Path in the recent past have learned nothing? How can we still have the same dysfunctional folie à deux playing out between credulous tech media and even more credulous VC investors?